MIAMI (CBSMiami) – Before the start of Tuesday’s Miami-Dade commission meeting, protesters gathered in front of the downtown government building to demand that something be done about skyrocketing rents and tenants’ rights.

David Peery made his stance on rent increases in the county very clear.

“There’s a lot of fear and there’s a lot of pain within the county. I can tell you at least three or four dozen stories of people‘s rent going up by five, six, seven, eight hundred dollars per month,” he said. “how can people afford a place to live when they can barely keep food on the tables.” 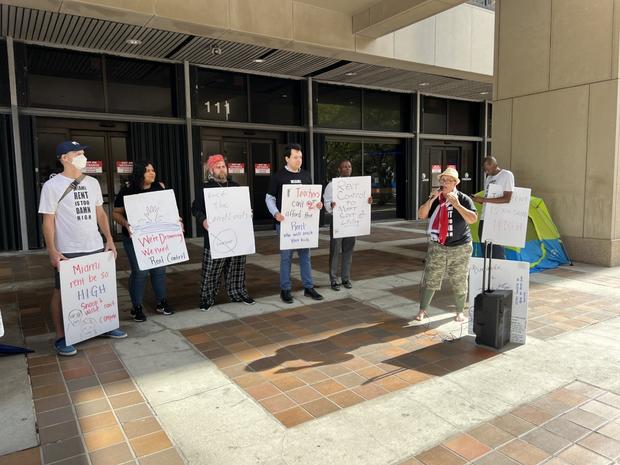 The sentiments were echoed by others who gathered in front of the government building, standing in solidarity as they sent a strong message to the elected officials.

“If we don’t do something now, something radical, we’re not going to have Miami the same way we’ve had it for the last two years,” said Angel Montalvo. Miami has seen rents jump 58% in the past two years, according to Realtor.com.

Those who came out said it is time for the county to enact a tenant’s bill of rights.

“While corporations have been bailed out, the people have not. The rents are skyrocketing. We are leading the nation in rent hikes. We want to make sure that there are more protections or accountability and that’s what a tenant bill of rights will do,” said Santra Denis.

The United Way of Miami-Dade was also in attendance to support this legislation.

“People need an advocate in this community, someone who’s going to stand up for them at the county level,” said the United Way’s Beth Berglin.