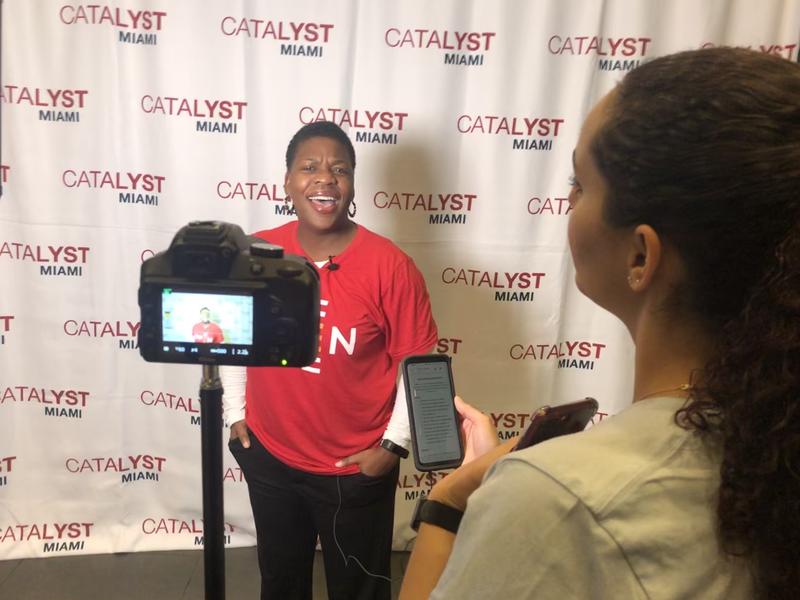 The community advocacy group Catalyst Miami is creating a collection of personal stories about the importance of oral health care. The group shot videos of people sharing their anecdotes during an oral health summit at Miami Dade College in Hialeah.

Some Florida dentists, hygienists, students and advocates are promoting a legislative proposal to create a new tier of providers who could offer routine procedures to people who lack access to oral health care.

A plan to create a new state license for dental therapists, mid-level practitioners comparable to physician’s assistants in medicine, was one solution offered at an oral health equity summit held Tuesday at Miami Dade College’s Hialeah campus. The practitioners perform procedures like filling cavities, placing temporary crowns and extracting loose or diseased teeth, under the supervision of a dentist.

Republican Sen. Jeff Brandes of St. Petersburg is sponsoring a bill, SB 152, that would regulate the education and licensure of dental therapists. Similar bills have received support in the state Senate but failed to pass the full Legislature in recent years.

Kathlyn Leiviska is a dental therapist in Minnesota who has advocated in Florida and other states for laws that establish her position. She said while dentists can perform about 400 procedures, she can do 83, and she is paid about half as much.

“If it passes in your state, you don’t have to hire dental therapists. There’s nothing that mandates you to do that. But it’s a tool in your toolbox that you can use to help bring more providers to that population,” Leiviska said.

Susan Kass, who directs MDC’s dental hygiene program, wrote in a recent letter to the editor published in the Miami Herald that dental therapists would help more people receive care.

“Miami Dade College’s dental hygiene clinic serves thousands of patients each year, offering comprehensive care at a nominal cost,” Kass wrote in the op-ed. “When our students and licensed dentists find dental decay and the need for restorative care, we refer our patients to facilities throughout the county. What we see repeatedly, however, is that when many of these patients return, they have not had the restorative care.

“Expanding the array of dental providers to include therapists would allow Floridians access to oral health care they need and, frankly, deserve,” she wrote.

An attendee at Tuesday's summit raised a question about whether the addition of dental therapists could eliminate jobs for dentists and hygienists.

Jane Grover, a representative of the American Dental Association, argued it was better "to utilize and maximize the opportunities that are already on the ground right now," like placing more dentists in underserved areas and supporting advanced certifications for dental assistants.

Dental therapists are recognized in about a dozen states, and Florida is one of a handful of others currently considering creating new licensure requirements, according to the American Dental Hygienists’ Association.

Another legislative fix that could increase the availability of dental health care would require state funding. Lawmakers approved a measure this spring offering loan repayment for dental students who agree to accept Medicaid or work in underserved areas, but the program wasn’t funded.

During the event, participants signed letters to Republican U.S. Senators Marco Rubio and Rick Scott, who represent Florida, asking them to support legislation that would increase the coverage of oral health care under Medicare, a federal health insurance program for the elderly and disabled people. Susan Galvis signed one of the letters. She’s a dental assistant at a children’s hospital and is studying public health at Florida International University. She said educating parents in oral hygiene is key to improving children’s oral health.

“We don’t do anything by brushing one day or flossing one day. We’re doing it there, on site [at the dentist’s office], but then, parents need to enforce it,” she said. “We need to teach the parents even more.”

Other suggestions offered during the summit include: Hiring dental hygienists to work in schools, putting toothbrushes and non-foaming toothpaste on students’ lunch trays, raising awareness about how oral ailments can develop into more serious health complications, and paying people to go to the dentist once a year.

University of Florida College of Dentistry professor Scott Tomar explained the detrimental impacts of the lack of access to oral health care.

He said emergency rooms aren’t always equipped to treat dental problems. When people report to hospitals with tooth abscesses or other dental problems, they’re often prescribed antibiotics and painkillers, including opioids, he said.

“When we can’t provide early preventative and treatment services, this is what the outcome is,” Tomar said.

This story originally appeared on WLRN.org