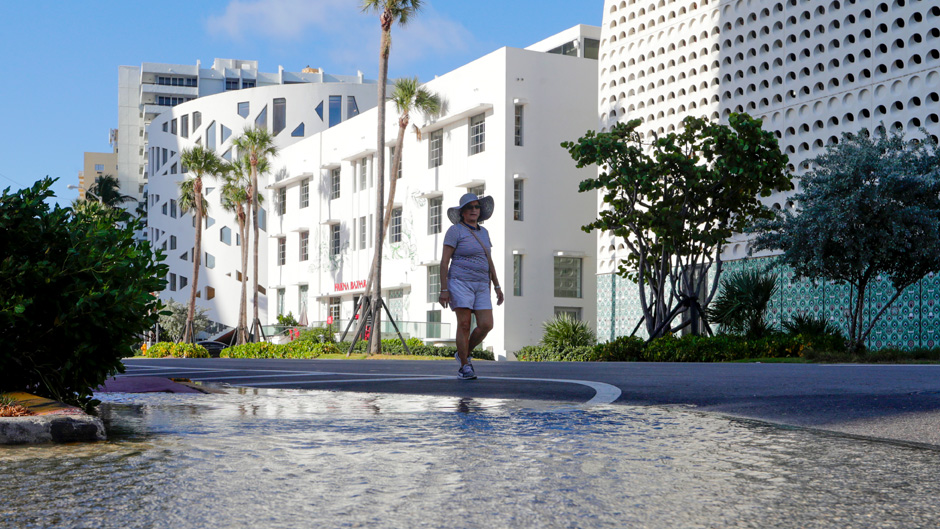 A woman walks along a flooded street in Miami Beach caused by a king tide on Sept. 28, 2019. Photo: The Associated Press

As part of the University of Miami multidisciplinary initiative, Hyperlocalism: Transforming the Paradigm for Climate Adaptation, residents from Homestead and Little River devised solutions to combat the effects of climate change in their communities.

The days have been unusually hot, even by Texas standards.

That is how Merline Leonce, who grew up in the Gulf Coast city of Baytown, just east of Houston, describes the sweltering heat that has enveloped Miami this summer. “And the humidity,” she said, “which we didn’t get a lot of in Texas, makes it even worse.”

Leonce, who has lived in Miami for the past 25 years, has a simple solution to make the uncomfortably hot days a bit more bearable: plant more trees, which significantly can lower temperatures in neighborhoods.

Urban tree canopy is just one of the many adaptations she and a group of others produced as part of a University of Miami study that asked residents to devise action plans to combat the effects of climate change in their neighborhoods.

The project, Hyperlocalism: Transforming the Paradigm for Climate Adaptation (HyLo), assembled 28 residents from the Homestead and Little River communities, bringing them together on virtual platforms such as Zoom and Webex to share stories of how intense heat, flooding, and other consequences of a changing climate have impacted their livelihoods and to lay the groundwork on how to mitigate those conditions.

Funded by the University of Miami Laboratory for Integrative Knowledge (U-LINK), HyLo is one of the few of its kind, putting the power for change in the hands of residents instead of government entities, said Joanna Lombard, a professor in the School of Architecture and one of the project’s co-principal investigators.

“We demonstrated that it could be done another way,” said Lombard, whose work focuses on design strategies to create healthy communities. “The idea was to have a process that belongs to the citizens—a process they own.”

Over the course of a year, residents met virtually in a multitude of large and small online sessions, sharing ideas on how to improve their communities. Two nonprofit organizations with strong ties in the Little River and Homestead communities facilitated the meetings: the CLEO Institute, which is dedicated to climate education, advocacy, and engagement, and Catalyst Miami, which has a mission to identify and solve issues that adversely affect vulnerable communities.

Representatives from local government planning offices also participated in the sessions, offering input and assistance on turning ideas into reality.

“What surprised me was that the residents were willing to jump in and participate despite a history of promises from past initiatives that yielded few results,” Lombard said. “They came with open hearts and a very strong and passionate vision about what they wanted to see for their communities. And the solutions they came up with were incredibly practical.”

Leonce, who lives in Richmond Heights, just north of Homestead, wanted to see more bus stop shelters installed along the stretch of the busway in southern Miami-Dade that her 15-year-old daughter uses to get to school.

Little River resident Pamela Ndah said she was concerned about the lack of tree canopy and greenspace in parts of her community. But it is serious flooding that worries her most, she said, noting that standing water in her neighborhood after heavy rains makes it difficult for kids in the area to walk to a local elementary school. “Just imagine how difficult it is for a single mother who lives in this area. It can be raining, and it’s flooding, and the water is knee high, and she’s trying to get her child to school,” Ndah said.

Likewise, longtime community activist Kelli Ann Thomas was alarmed about standing water in her Homestead neighborhood, sharing images of how the ground floor of her apartment building floods after a heavy downpour.

HyLo investigators incorporated into the project geospatial risk factors such as the age of residential dwellings, the prevalence of air conditioning, groundwater level and depth, and proximity to public transportation and parks, finding that such factors can have a significant impact on the extent to which climatic conditions affect residents.

The team also used data that supported residents’ claims of flooding, extreme heat, and a dearth of greenspace in certain areas.

To document the climate-related problems in their vulnerable neighborhoods, the residents shared written narratives and used the visual research technique known as photovoice, which puts cameras in the hands of participants.

“It’s a different way to get individuals within a community engaged and focused specifically on issues that impact them,” said Tyler Harrison, a professor of communication studies in the School of Communication, who served as a co-principal investigator for HyLo. “The inclusion of visuals gives a different perspective on the issues community residents are experiencing and provides a different way of sharing ideas and engaging with other community members and policymakers,” he said. “The issues and stories they bring to the table are the issues they care about most, and often their passion about the topics shows.”

Some of the online sessions served as learning opportunities for residents. Sam Purkis, for example, professor and chair of marine geosciences at the Rosenstiel School of Marine, Atmospheric, and Earth Science, provided information on Greater Miami’s ground topography and the underlying limestone bedrock atop which it is built.

“Miami is built atop an area that was a seabed only 125,000 years ago. The gentle undulations of the land owe themselves to fossil sand shoals and tidal channels,” Purkis said. “The limestone is like a sponge; it’s porous and permeable. It’s like Swiss cheese, and that allows water to soak through, which is a good thing because, of course, it rains a lot in Miami. And luckily, all that rain soaks away for the most part. I think most of the flooding that the residents are experiencing are the backing up of the Miami storm drains, and that’s an infrastructure problem.”

The residents’ ideas to reduce climate change effects are turning into results. Since HyLo virtual meetings ended, Leonce has noticed that more shelters are being erected along the bus routes. Lombard is following up with county officials to ascertain the success in Homestead and Little River of the Million Trees Miami Campaign, a community-wide effort to achieve 30 percent tree canopy cover for Miami-Dade. And the county’s Office of Resilience has implemented an environmental protection and resilience plan for Little River.

Researchers have detailed the Homestead and Little River HyLo project in PLOS Climate.

Now, investigators have turned their attention to the communities of Liberty City and Overtown, conducting online sessions with residents in those vulnerable areas.

“As cities and counties around the nation plan investments for adapting to climate change, it is critical to understand how this relates to what people are experiencing in their daily lives,” said Amy Clement, a professor of atmospheric sciences and one of HyLo’s co-principal investigators. “There is, at present, no playbook for this. Our project was aimed at testing a novel method for bridging the gap around climate adaptation between governments and the people they are serving.”