A life preserver on healthcare 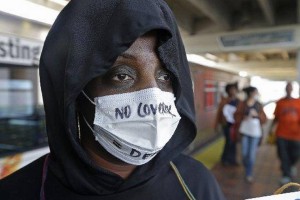 LEFT UNCOVERED: In January, Kamalah Fletcher and others passed out a petition and information about the estimated 160,000 Miami-Dade residents who are without health insurance because of the Legislature's refusal to expand Medicaid. AL DIAZ Miami Herald Staff

A state Senate committee has approved a bill to allow Florida to accept billions of federal dollars to expand Medicaid. The proposal would throw a life preserver to vast numbers of Floridians drowning in medical bills and unable to afford health coverage.

Hallelujah, right? Well, not exactly. SPB 7044 won unanimous approval last week in the Republican-dominated Senate Health Policy Committee, but political ideology has a history of trumping good policy in Florida when it comes to healthcare. The current legislative session might not be any different.

The plan would allow Florida to accept $50 billion in federal dollars to extend coverage to about 800,000 low-income residents by expanding Medicaid. But since expansion is part of the Affordable Care Act, anathema to many Republican legislators, the bill faces a steep uphill climb in the more-conservative House before it can get to Gov. Rick Scott’s desk.

Lawmakers rejected a proposal to expand Medicaid in 2013, and last year it wasn’t even considered.

Senate President Andy Gardiner and his allies deserve credit for trying to overcome their colleagues’ objections. They have added a work requirement to make it more palatable to the House, and they want beneficiaries to pay a small monthly premium for eligibility. The feds are not likely to look kindly on either requirement, but at least this gives the uninsured a glimmer of hope that Florida can join those states where having no private health insurance is not a death sentence.

We have advocated tirelessly in support of Medicaid expansion because it’s extremely frustrating to see the feds’ money go begging when there is such dire need in this state, particularly in Miami-Dade County. And because our federal taxes are used to fund Medicaid expansion in other states. And because there is no good reason to reject the money.

So as this proposal goes forward during the session, we’ll try not to think of the poor odds and focus instead on ways to get it done:

▪ Don’t be misled by efforts to tie Medicaid expansion to other federal programs. Another source of federal healthcare funds called the “low-income pool,” or LIP, is being phased out because of the Affordable Care Act, but Florida is negotiating with Washington to keep it alive.

Already, some legislators say that if LIP funding is restored, the state doesn’t need Medicaid expansion. Wrong. These are two separate pots of money. LIP helps reimburse hospitals beyond regular Medicaid rates and also supplements hospital care for uninsured patients. Medicaid expansion does not replace LIP, nor does having LIP help the army of uninsured Floridians without coverage. Not having either program, of course, puts the state in a healthcare and budget crisis.

▪ Get Gov. Scott involved. The governor said he favored expanding Medicaid in 2013, but didn’t put his political muscle behind the effort. He could make a difference by working with pro-expansion lawmakers to craft a strategy and win critical votes.

▪ Listen to the business community. Tom Feeney, CEO of Associated Industries of Florida, says a statewide business coalition favors the proposal because it provides a free-market, consumer-choice exchange and offers a fiscally responsible, market-based solution to draw down federal dollars.

Could this be the year Medicaid expansion triumphs in Florida? We’ll to curb our enthusiasm, but are encouraged by the story thus far.