The next time floodwaters rise in Miami, the city's poorest communities will be the first to get lost in the undertow, a new study shows.

The report from the Center for American Progress (CAP), a liberal Washington, D.C-based think tank, highlights the importance of equitable climate resilience and its tight ties with public health and economic stability in South Florida.

Cathleen Kelly, a senior fellow at CAP and lead author of the study, said Miami-Dade County's vulnerability to sea-level rise is compounded by high poverty rates and unequal access to resources.

"It's this financial instability and underinvestment in housing and infrastructure that makes people so vulnerable to climate risks," said Kelly.

"There has to be strong investment in county officials to improve social and economic equity, to help lift people out of poverty," she said.

According to 2013 U.S. census data, roughly 20 percent of the county's residents live below the poverty level. That's higher than the statewide average of 16 percent. This demographic, according to Kelly, is among the least prepared to deal with climate change.

Meanwhile, Miami remains a top destination for retirees and tourists alike. The draw of its sunshine and sandy beaches means beachfront neighborhoods continue to expand.

Without state or national planning, the poor lose

"This is a slow-motion train wreck," said Richard Olson, a professor and director of extreme events research at Florida International University. "We're developing toward the water, and the water is developing toward us -- it's an inevitable collision."

The problem, Olson said, is twofold. 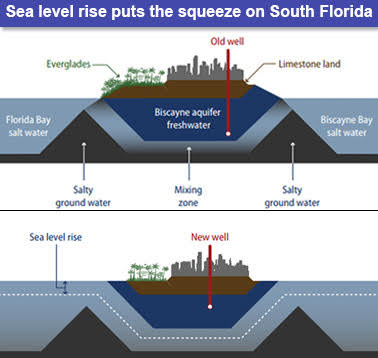 [+] How rising seas and saltwater intrusion pose a threat to life in Miami-Dade County. Graphic courtesy of the Center for American Progress.

Without a state or federal initiative on rising sea levels, cities and counties with hugely different incomes are left to fend for themselves.

Some communities, like the affluent Miami Beach, have invested heavily in resilience efforts like raising roads, converting lower levels to floodable basements and installing hundreds of millions of dollars' worth of pumps to siphon stormwater out of low-lying areas.

But Olson said such measures are temporary -- merely short-term fixes that buy residents a decade and push the problem down the road.

Karen Hamilton, a regional planner at the South Florida Regional Planning Council, said those changes may not solve the issue, but they're better than nothing.

"It's not an easy fix," Hamilton said, but "people will plan for the things they can see, and you have to get buy-in -- you have to start somewhere."

Sen. Nelson: We are 'ground zero' for climate change

That start, Kelly believes, lies in investing in the poorest communities first.

"Step one is to improve social equity and economic opportunity across the country, with a focus on low-income areas," Kelly said.

She said it's important to recognize the high obstacles facing many of Miami-Dade's neighborhoods. Those include economic factors, level of understanding the issues and also language barriers -- more than 51 percent of residents in the county are foreign-born, according to the U.S. Census Bureau.

Nichole Hefty, who works under Murley as sustainability manager, said the office of resilience is working on several initiatives to be presented to the county board in March. These include identifying areas that are more vulnerable, she said, and continuing a dialogue with insurers and businesses.

"We have a lot of pieces already in place; we just need to figure out how to leverage them better," Hefty said.

In the meantime, pressure continues to mount to address the problem on the state and federal levels.

"We can't keep denying what is, in fact, happening," said Sen. Bill Nelson (D-Fla.) in a statement.

"South Florida is ground zero for sea-level rise, and what's happening in Miami right now is the wave of the future unless we start adopting some common-sense policies and building bipartisan support for a solution," he said.