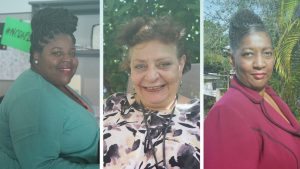 Bereatha Howard often looks after her elderly father at his home in Liberty City. He lives alone in a small, white, two-story house and uses a cane to walk to the door. If a storm were to hit, she’s not sure how he’d fare.

While sitting in a climate change seminar at Catalyst Miami, a human services nonproft, Howard watched slide after slide of the devastation caused by Hurricane Katrina in New Orleans, and the neglect of some of the poorest communities after the storm.

She finally grasped the reality of what not being prepared for climate change – and the extreme weather it will bring – could do to the people she loved most.

“The devastation of it all grabbed me,” she admitted. “What can we do to prevent that from happening again?”

Start with education, she learned.

“A lot of times things happen after the fact… [we’re] looking around and feeling neglected,” she said. “But having a plan and understanding what to do before a storm, [having] the resources, and knowing how it works will make us more informed and better prepared.”

That’s why over the next few months she’ll be helping community members create emergency preparedness kits. The end goal is to make sure the people in her father’s community are prepared in the case of a hurricane or unexpected storm, and help them learn how to advocate for themselves if a Katrina-like storm hits South Florida.

She’s one of the many local women empowering low-income communities in the face of unprecedented, and increasingly rapid rates of climate change.

“Humans have never observed climate change on this scale before,” explained Katherine Hagemann, the sustainability initiatives coordinator at Miami-Dade County.

Sea level rise, temperature increases, and more damaging storms are on the way. And study after study has shown that climate change will disproportionately affect poor families. That’s because they’ll have the fewest resources to adapt or or to be able to recover quickly from a shock.

And while South Florida is beginning to adapt to the impacts of sea level rise, it’s not happening equitably: Miami Beach is installing pumps to push out water and raising streets, but those infrastructure improvements aren’t happening anywhere else.

A big part of that is representation. For so long, the people in the room advocating for climate change resilience were rarely from places like Liberty City or Little Haiti. And they’re often not present when policy decisions are being made, either.

The other part of that is a resources issue. Miami Beach collects higher taxes and stormwater fees so it can afford to shell out the money for these types of isolated improvements on the city level. Meanwhile, other municipalities or parts of unincorporated Miami-Dade, places whose tax bases aren’t very high, are relying on the county to take action.

And with increasingly hot days, communities in poorer parts of Miami, some of whom don’t have air conditioning units in their homes or large, shady canopy trees to line the streets, will feel the effects far more starkly than those who have the resources to buffer them.

Breaking down the science

That’s why Caroline Lewis, the founder of The CLEO Institute, a nonprofit that drives climate action through community education and engagement, is making sure residents from neighborhoods like Shorecrest, Liberty City, Little Haiti, and Sweetwater are heard.

Her primary goal is education. Her previous professions as a biology teacher at Ransom Everglades and director of education at Fairchild Tropical Botanic Garden has positioned her to do this well.

She commands the attention of a room, passionately leading seminars that “bridge the divide between science and society,” she says.

In the last year, CLEO has educated almost 400 people on climate education and advocacy in vulnerable black and Latino communities.

Lewis is also working on a pilot project to bring solar powered air conditioning to homes that don’t have them — to help address the impacts of high heat as global temperatures rise.

Getting a seat at the table

But in a community already barely making ends meet and struggling with gun violence, climate change is low on the list of things a Liberty City resident worries about, says resident and activist Paulette Richards.

Richards is particularly worried about “climate gentrification,” a name she came up with several years ago while talking with her representatives in Washington, D.C. Developers are already buying up land in higher elevation places like Liberty City and Little Haiti, which are on average 10 feet above sea level, as an investment in Miami’s partially underwater future.

After graduating from a program offered through CLEO, Gunder went on to become a climate leader herself, hosting town halls and listening sessions all around Liberty City and Little Haiti. She’s worked with everyone from her neighbors nearby, to imams and priests across the county.

Now, she’s the climate organizer at New Florida Majority, an activist group that works toward increasing the voting and political power of marginalized communities.

She does educational workshops with the community once a month and is also now working alongside Catalyst Miami to develop emergency preparedness kits to distribute throughout Little Haiti and Liberty City. She’s trying to build a community garden and get the county to put in large, canopy trees in her neighborhood.

Gunder is also working on an initiative to teach local residents to be their neighbors’ first responders in the case of a storm.

“There are steps you can take to get everyone to safety and check on one another,” she explained. “I want to educate our communities on how to be our first responders because apparently we’re not on the top priority list for the county or the city.”

And she’s getting her community civically engaged by encouraging them to show up and voice their opinions at county commission meetings.

Gunder’s also working on diversifying city and county level leadership, to make sure it includes Latino and black voices. Recently, Miami Beach, Miami, and Miami-Dade joined the Rockefeller Foundation’s 100 Resilient Cities network — which means they will receive funding and support to develop a resilience strategy. Gunder attended one of the initial planning meetings.

“I was invited and that’s very rare,” she said. “But that’s a big start because at one point none of us were in that room.” She says it’s important to be there because that’s the only way Miami-Dade’s cash-strapped communities will actually be heard.

“You can’t understand what it means to be Latino and speak very little English when someone is trying to help you, or have literature that is not in Spanish or Haitian Creole,” she argued. “They can’t plan for us if we’re not at the table.”

Through her work, Gunder aims to make sure decision makers see the people who will be impacted by climate change above all else.

This article was originally posted in The New Tropic.