Greater Miami Unveils Its Rockefeller Resiliency Plan. But What It Covers Might Surprise You. 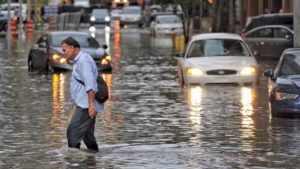 Three years after they joined the Rockefeller Foundation to create a grand plan to fight rising seas, climbing temperatures and other worsening climate hazards, three of South Florida’s most threatened places unveiled their blueprint Thursday.

The plan, created by Miami-Dade County, Miami and Miami Beach, boasts 59 “specific actions” already in place. And it is far broader than originally envisioned, addressing issues such as youth violence and the opioid epidemic.

But the wonky strategy may test the patience of a region where rising seas threaten more real estate than any other state. It comes up short on new ideas and includes many existing pilot projects and programs underway before the effort was launched.

“This is a resilient strategy that looks beyond climate at shocks and stresses that affect our community,” said Miami-Dade Chief Resilience Officer Jim Murley. “Therein lies the thing that makes this a different kind of implementation plan by including all these other things.”

Rather than recreate “the wheel,” Murley said the plan aims to reshape the strategy of local cities by committing them to a framework of fixes. Nothing in the plan is mandatory and no estimated costs for the fixes is outlined.

It also mirrors Rockefeller plans drafted around the country that went beyond climate impacts: Boston focused on racial inequality and Los Angeles took aim at problems among its immigrant community.

So far, 12 of the county’s 34 municipalities have agreed to the plan, including South Miami, El Portal and North Miami Beach.

On Thursday, after they rolled out the plan at rooftop party at the Perez Arm Museum, Rockefeller's 100 Resilient Cities president Michael Berkowitz said it was unclear what kind of help those cities would get.  Miami-Dade, Miami and Miami Beach had access to $200 million in planning and research services from companies like reinsurer Swiss Re. But Rockefeller dramatically scaled back the $164 million national effort earlier this year. The program is now being administered by the Atlantic Council with a $30 million from Rockefeller and $25 million from philanthropist Adrienne Arsht.

"100RC is transitioning so we and the Foundation are thinking about how to cointine to make those partners available. So we’ll have to see and yes, the idea is certainly for many of those partnerships to continue to be available," Berkowitz said.

Rockefeller plans on providing some money to help implement the South Florida plan, but how much is not clear, said Otis Rolley, a Rockefeller managing director for jobs and economic opportunity. When asked how much the foundation provided other cities, he said some cities received between $5,000 and $10,000 and another was awarded over $900,000.

"I'm not trying to dance around it, it's just we really don't know yet," he said.

The plan’s critical issues including fixing Biscayne Bay and local reefs, two of the ecosystems among the most threatened by increasing stormwater from rising seas. But it relies on existing measures including an advisory board for the bay and a longstanding reef restoration effort.

No mention is made of more than 21 square-miles of seagrass lost in Biscayne Bay over the last decade caused by worsening water conditions or an unprecedented coral die-off that started off Virginia Key in 2014. The die-off has now traveled down the Florida reef tract, threatening a tourist magnate and barrier for flood protection that the U.S. Geological Survey said last month provided $1.6 billion in protection during severe storms.

The plan also calls for the county to implement its three-year-old SMART plan to deal with the problems brought on by ongoing growth. Take Homestead. Murley said the county wants to see continued development at the south end of the county because the SMART plan calls for a bus system.

“We hope that that continues because we're going to build a premium bus system, bus rapid transit, connecting to Metro Rail down to that Homestead station,” he said. “We don't want to see development moving out of the urban growth boundary that the county has, but we definitely want to see development taking place where it's well-served by water sewer transplant.”

The plan is at least the sixth for the region since 2012 aimed at addressing climate-driven problems. Among the worst: increased flooding and saltwater intrusion threatening drinking water supplies. And it repeats many of the same calls for action: fix aging infrastructure incapable of dealing with increased flooding, improve natural resilience, make a plan for dealing with sea level rise.

But unlike the others, it widens the scope of resilience measures to include youth violence, opioid addiction and mental health, traffic problems, affordable housing and job training.

That’s because the region needs to work on making sure its urban core is more resilient, Gilbert said.

“If we have a hurricane and the homeless population is not taken care of, we’re going to have far more threats to human lives if we don’t have systems in place,” said Miami resilience chief Jane Gilbert.

Miami-Dade, Miami and Miami Beach were selected to be part of the program in May 2016 from 325 applicants after demonstrating a commitment to becoming more resilient despite repeated criticism for acting too slowly.

The Rockefeller Foundation had launched the project in 2013 with 32 cities around the globe. Twenty pledged to spend 10 percent of their budgets on initiatives. While it’s not clear how much local cities plan to spend, Murley and Gilbert said Miami, Miami Beach and the county are already spending more.

The plan also replaced Miami-Dade County’s own plans to draft an attack for battling aging infrastructure and other issues. Miami-Dade Mayor Carlos Giminez hired Murley, then the director of the South Florida Regional Planning Council, agreeing to pay him $190,000 a year after environmentalists complained a $75,000 a year position he created would not attract an expert with the skill needed to address such complex challenges.

Murley initially intended to have a plan drafted by the spring of 2017 but changed course after the Rockefeller Foundation included the county in its effort. No money came with the award, but the foundation said local governments would have access to up to $200 million in expertise.

“There's no magic bullet project that’s going to protect us from climate [change], sea level rise, or hurricanes. That's part of living in South Florida,” Murley said. “But we are advancing through this strategy the work that we identified and any additional work that needs to be done to make this a more resilient community to those effected by those shocks and stresses.”