Higher Ground? Not So Fast 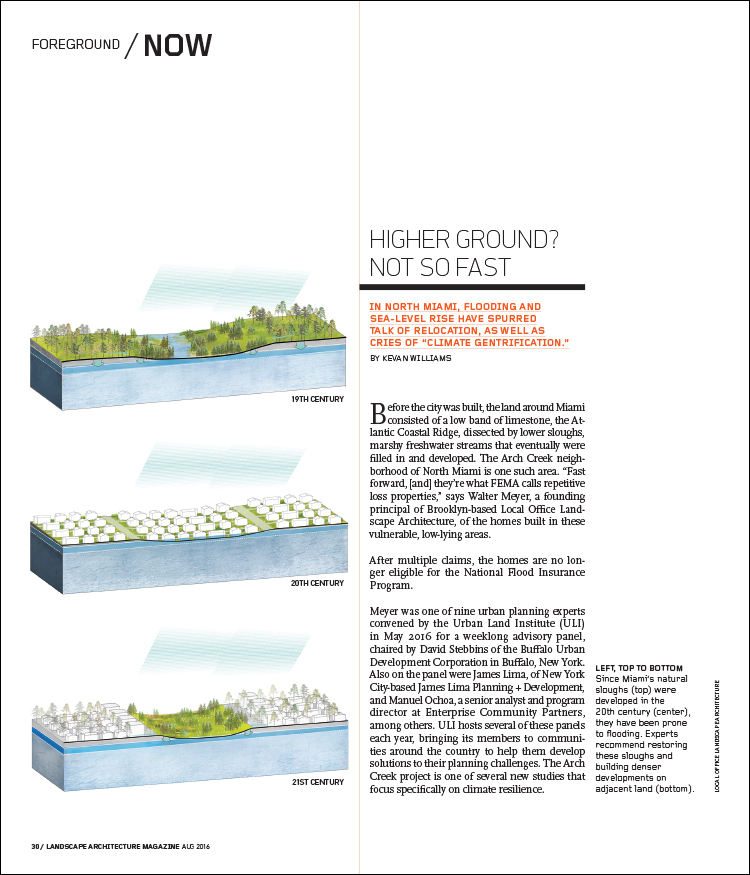 Before the city was built, the land around Miami consisted of a low band of limestone, the Atlantic Coastal Ridge, dissected by lower sloughs, marshy freshwater streams that eventually were filled in and developed. The Arch Creek neighborhood of North Miami is one such area. “Fast forward, [and] they’re what FEMA calls repetitive loss properties,” says Walter Meyer, a founding principal of Brooklyn-based Local Office Landscape Architecture, of the homes built in these vulnerable, low-lying areas.

After multiple claims, the homes are no longer eligible for the National Flood Insurance Program.

Meyer was one of nine urban planning experts convened by the Urban Land Institute (ULI) in May 2016 for a weeklong advisory panel, chaired by David Stebbins of the Buffalo Urban Development Corporation in Buffalo, New York. Also on the panel were James Lima, of New York City-based James Lima Planning + Development, and Manuel Ochoa, a senior analyst and program director at Enterprise Community Partners, among others. ULI hosts several of these panels each year, bringing its members to communities around the country to help them develop solutions to their planning challenges. The Arch Creek project is one of several new studies that focus specifically on climate resilience.

Among the panel’s recommendations is to create a land bank or other program that could help homeowners in moving out of low-lying areas, potentially swapping homes in flood-prone places for foreclosed homes on higher ground. “Our strategy is restoring these sloughs in an urban form,” Meyer says. “The idea for this is that we create a replicable pilot project [because] this is one of many sloughs that slice through the city.” Fully realized, these riparian corridors could take the form of greenway parks two or three city blocks wide, flanked by denser urban development in adjacent upland areas.

But the prospect of relocating residents from low-lying areas, whether in the sloughs or on the coast, is already raising concerns among those who live on the ridges, historically less desirable areas where the region’s railroads were built. Caroline Lewis, the executive director of the CLEO Institute, a Miami-based climate advocacy organization, was interviewed by the ULI team. She says that because these higher-elevation properties are now sought after by speculators, low-income families who currently live there are “being preyed on by developers.”

“One hot topic among the communities that are higher ground, that for whatever reason tend to be lower-income, African American communities, is ‘climate gentrification,’” says Gretchen Beesing, CEO of Catalyst Miami, who was also interviewed by the ULI team. Although relocation could present opportunities for transit-oriented and mixed-income redevelopment, Beesing says such an effort will need to involve current residents if it is to be successful. Lewis recommends granting more involvement in decision making to those who will be directly affected. “It’s not sufficient to include only the CEOs of organizations that serve those communities,” she says.

If the ULI panel has lasting value for Arch Creek, it may lie in its provision for a frank conversation about the realities of climate change and sea-level rise, which could reshape these coastal communities sooner than many want to admit. “I think some people are ready to talk about retreat,” Lewis says, though others are not. But in this part of the country, where many communities are just a few feet above sea level, even this proposal would go only so far when some recent climate models predict four or more feet of sea-level rise by 2100. “The thinking,” Meyer says, “is that we buy time with a local solution.”