This article originally appeared in the Miami New Times. 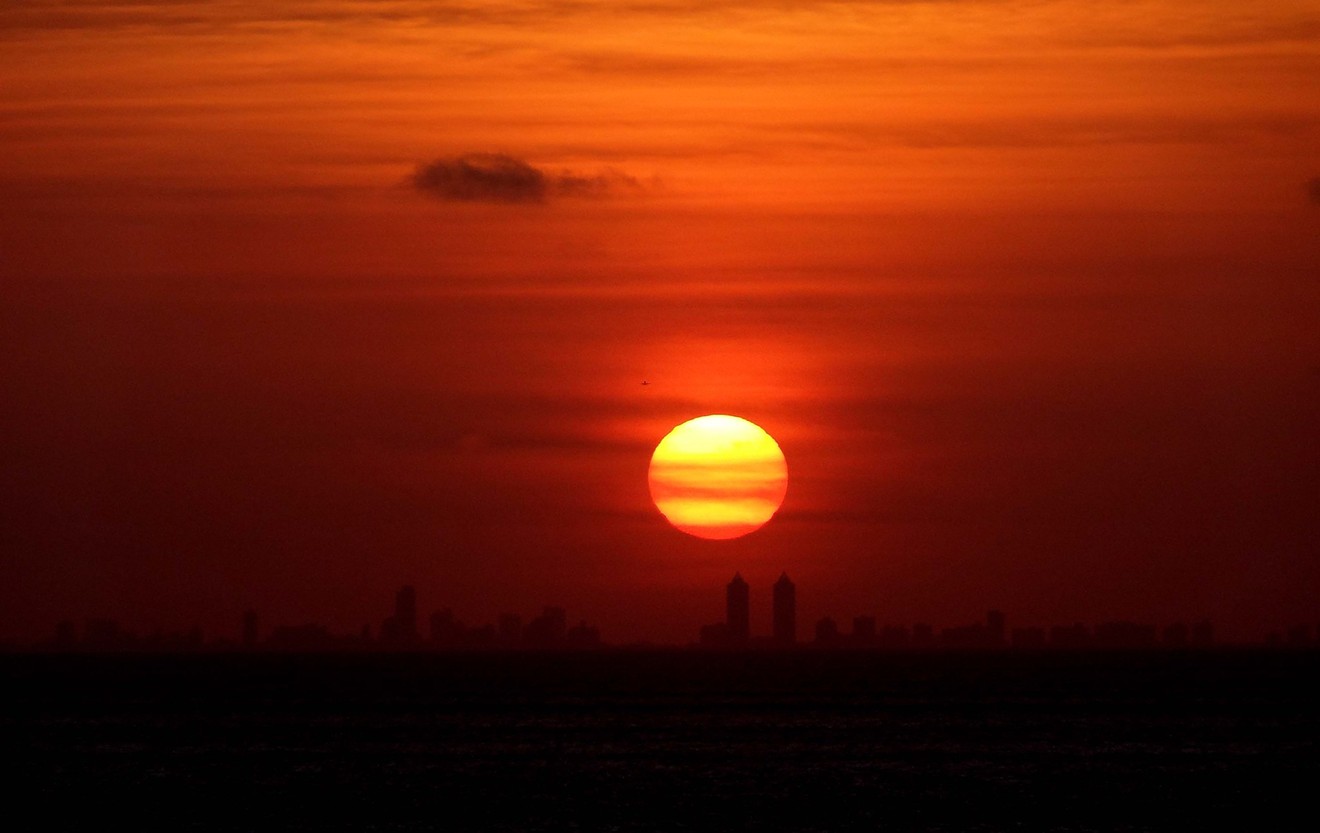 It's hot. It's gonna get hotter. Photo by Rayandbee via Flickr

Summer is winding down in Miami, but the blistering hot days are not. On August 18, the heat index in Miami — or the "feels like" temperature, if you prefer — hit 106 degrees Fahrenheit, according to data from the National Weather Service.

Days of similar extreme heat will be more frequent in years to come.

A recent study authored by the First Street Foundation predicts that Miami-Dade County will see the number of days with a heat index of 103 degrees will increase from seven to 34 by 2033. This stands in contrast to the national average of 18 days of extreme heat.

"Generally, what we're saying is: Think about how hot it was during the hottest week of the summer. That becomes your hottest three weeks in 30 years," First Street's chief research officer Jeremy Porter tells New Times. "It helps people kind of internalize what that means for the warming environment."

The climate nonprofit's nationwide study predicts that Miami-Dade residents will experience 91 days with a heat index above 100 degrees by 2053 — a 41-day increase from the present day. These so-called dangerous days will increase to 95 and 94 days, respectively, in Broward and Palm Beach counties.

"It's important for people to understand that they should be prepared for those extreme events," Porter adds. "There will be more days where the National Weather Services indicates that dehydration, heat cramps, and heat stroke become more likely."

A 2021 report from researchers at the University of Florida found that 215 heat-related deaths occurred in Florida from 2010 to 2020. Nearly one-quarter of the fatalities occurred in Miami-Dade (10 percent),  Broward (7 percent), and Palm Beach (6 percent) counties. According to the U.S. Environmental Protection Agency, excessive heat is the nation's leading weather-related killer.

Climate researchers and professors from the University of Miami Rosenstiel School of Marine, Atmospheric, and Earth Science applaud First Street for taking a hyperlocal approach to help Americans understand the impacts of climate change and global warming.

"The hyperlocal niche is so critical because it empowers local decision makers to start thinking about adaptation strategies like planting more trees and having more green space," Ben Kirtman, an atmospheric sciences professor, tells New Times. The flood risk and sea-level rise get so much attention in Florida. It's about time we started talking about heat because that is going to have a big effect here."

That said, the researchers emphasize that the number of extreme heat days in South Florida may actually exceed First Street's estimates.

"They're sort of inferring what would be in different, very localized locations around the country," explains atmospheric sciences professor Amy Clement. "When we actually measure it, the values that we get can be a lot higher. We have dangerously high levels of heat index in a lot of the country that are basically missing with some of the data that they use."

Clement is conducting a heat study of her own alongside researchers from Florida International University and Catalyst Miami, a nonprofit dedicated to environmental and economic justice in South Florida. Over the past three years, the "Shading Dade" initiative has measured how extreme heat varies throughout Miami-Dade County by placing heat sensors in public spaces such as parks, community centers, and bus stops. The group hopes to release its findings next month to highlight what areas in the county need better protection from extreme heat.

Possible community responses to excessive heat include planting more trees and offering more cooling centers where people can go to cool down on extremely hot days.

While the two heat studies focus solely on outdoor heat, indoor heat should not be overlooked. Certain homes are inefficient in cooling if they are not well designed or maintained, especially with respect to roof insulation and windows. Some structures retain too much heat, posing potential health impacts.

"Indoor heat can be really dangerous," says Lynee Turek-Hankins, a Ph.D. student at UM's Abess Center for Ecosystem Science and Policy. "Research in other places has shown that indoor temperatures can often exceed outdoor temperatures."

Turek-Hankins is leading a research collaboration between UM and Catalyst Miami to document Miami residents' indoor living conditions. In May, the group placed 60 sensors in households from Homestead to North Miami Beach to collect temperature and humidity data every ten minutes until November.

"One component we're exploring is this narrative that exists that heat is not really an issue in Miami because you can just go inside and there's air conditioning," Turek-Hankins says. "That fundamentally is based on this implicit understanding that everyone has a functioning air-conditioning system and they can afford to run as much as they would like. We're trying to really understand what actually are the indoor conditions people are living in, in South Florida."

In addition to increasing the number of heat-related deaths, extreme heat imposes a high economic burden as residents must keep up with utility costs.

UM's Kirtman says that as his research group seeks to discover the best strategies to mitigate the harmful effects of extreme heat in South Florida, he realizes that some solutions might be unconventional.

"We want to try to think about modeling strategies that can be used to inform how decisions are made at the local level," he says. "What if we planted 10,000 trees? What if we painted all the rooms some particular color? What would the impact be?"