Sue Brogan's street is barely above sea level on a good day.

During autumn's "king tides," when the sun and moon align to create the highest tides of the year, Biscayne Bay backs up through storm drains and flows into Brogan's street, in Miami's low-lying Shorecrest neighborhood.

Roads flood. The salt water rusts cars and kills greenery. For now, it's mostly a nuisance several days a year. But Brogan knows it's only going to get worse.

"It's more of a warning situation. Where is it going to go from this?" she asks.

Climate change is expected to raise sea levels a minimum of three-quarters of a meter by the end of the century, according to the estimates that regional planners use. That puts most of Shorecrest underwater year-round, along with other low-lying waterfront neighborhoods. And higher seas mean increased risk of tidal flooding and storm surges across this hurricane-prone city.

The planners' high-end estimate is two meters of sea level rise. That would submerge most of the glitzy city of Miami Beach, across the bay.

And scientists say three to three-and-a-half meters is extreme but plausible. In that scenario, Miami Beach is gone and Miami is an archipelago.

Planning for this future is difficult, expensive and often controversial. But the Miami region has little choice. 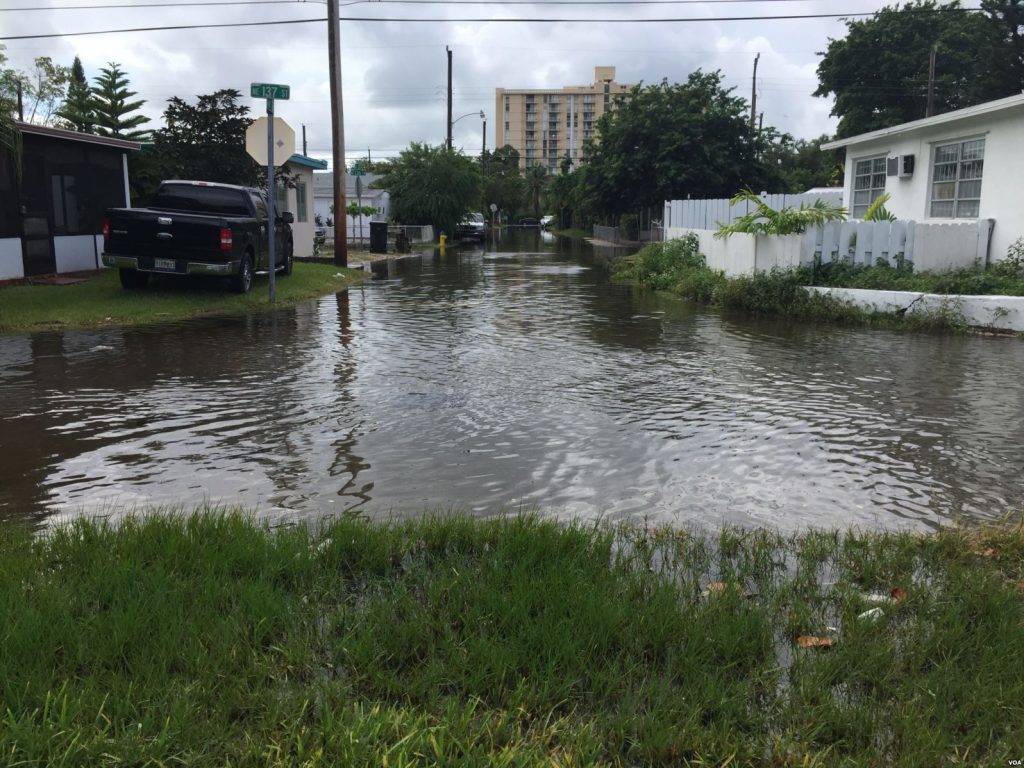 Residents are paying for roughly half a billion dollars' worth of seawalls, raised streets, sewer pumps and more.

"Thankfully, our residents — the folks that are footing the bill for this work — realize that the cost of doing nothing is much greater," said Public Works Director Eric Carpenter.

There have been some hiccups. In some places, the streets were raised but not the adjacent businesses. As a result, an insurance company considered one business to be a basement and denied a flood insurance claim.

Miami Beach is working to resolve the dispute.

"I think there are inherent risks with being first," Carpenter said.

But the city gets credit for moving forward despite the challenges.

"It's not working perfectly. But they're at least doing the experimentation," said Zelalem Adefris with the advocacy group Catalyst Miami. 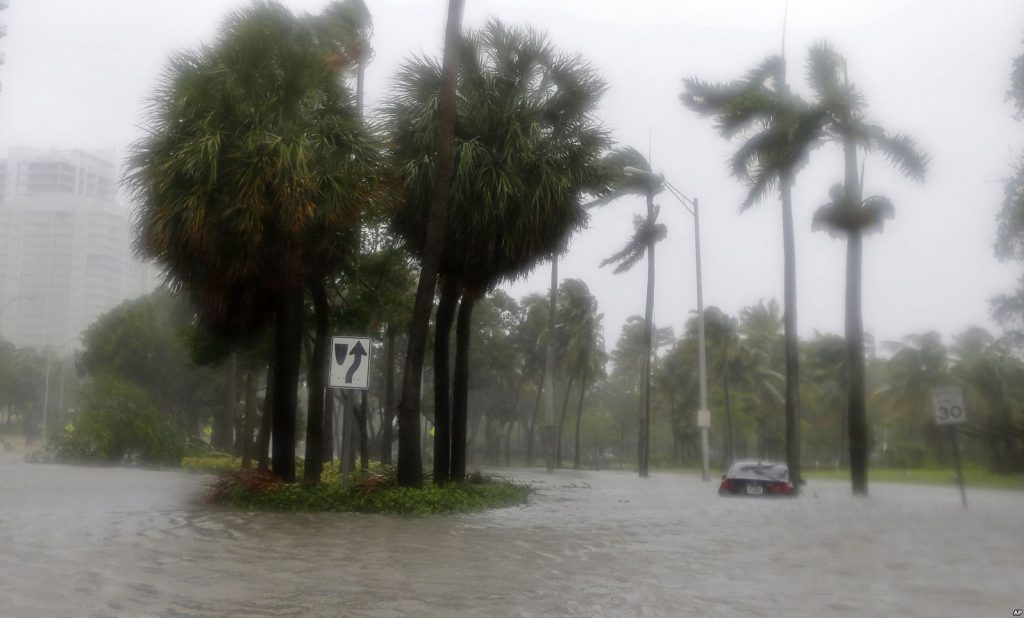 Heavy rains flood the streets in the Coconut Grove area in Miami, Sept. 10, 2017, during Hurricane Irma.[/caption]

Across the bay, she added, the City of Miami has been slower to act. But there are signs of progress.

Just this November, city voters approved a $400 million "Miami Forever" bond issue, half of which is earmarked for sea-level rise adaptation.

Shorecrest will likely see some of that money to upgrade sewers and raise roads.

More controversial proposals are on the table, too, like buying up some of the most flood-prone homes and turning the land into a flood-absorbing park. Residents could move to higher-density housing to be built on higher ground.

Brogan's building would be demolished. But she doesn't mind.

"With climate change, with rising water, we're going to have to abandon certain property," she admitted.

But like many in the mixed-income neighborhood, Brogan rents her apartment. Others are skeptical of the idea.

"I don't think the homeowners are going to be very happy about that," said Daisy Torres, president of the Shorecrest homeowners' association.

Objections come not only from residents whose houses would be torn down. Some people living near the areas where the city proposes building that higher-density housing don't like the idea, either, she added.

Jane Gilbert stresses that there are no immediate plans to rearrange Shorecrest. "They have a good amount of time to still be in that area," she said. "It's really much more long-term."

"We feel the more we are having those conversations now, the easier it is for everyone to adapt over time," she added. 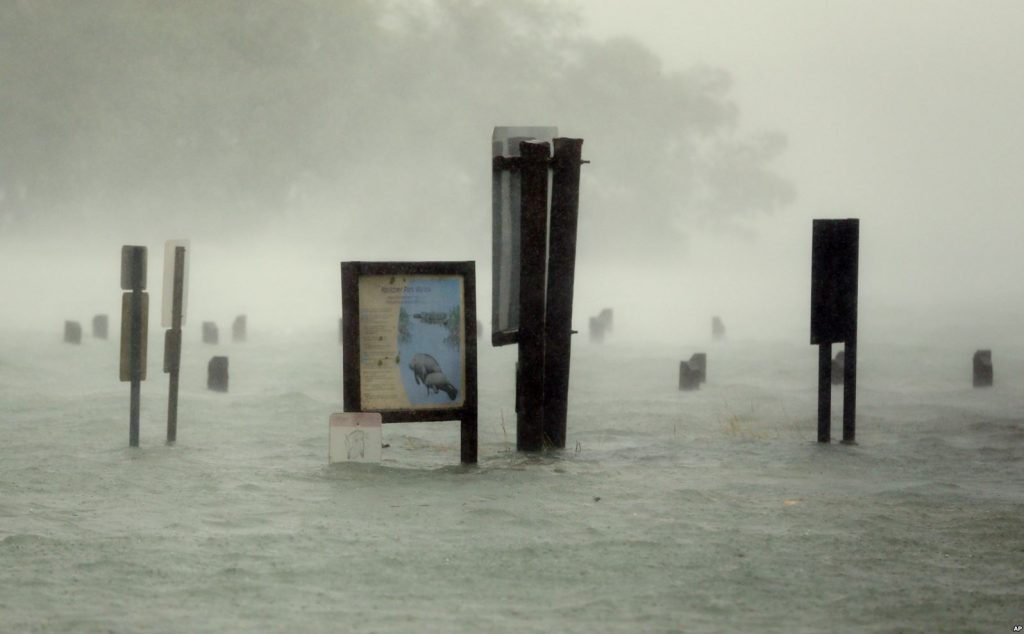 High and (not) dry in Highland Village

Meanwhile, in another flood-prone low-lying community just a short drive north, those conversations are further behind.

Frank Burrola lives in a trailer in Highland Village, a mostly low-income neighborhood of homes and trailers on small plots in the city of North Miami Beach. Fall high-tide flooding is a virtual certainty on his street. And a storm several years ago left his yard with knee-high water.

"Right now, we've got a real serious problem," Burrola said. "I don't know if we're still going to be around in five years if this keeps up."

While the cities of Miami and Miami Beach are beginning to prepare, "there are other areas that really don't have the funding, and they're the ones that are really suffering," said climate analyst Keren Bolter with the South Florida Regional Planning Council.

North Miami Beach is considering putting homes on stilts, and replacing trailers that flood with "tiny" homes that meet building codes, according to community development director Richard Lorber. But he doesn't know where the funding will come from.

North Miami Beach officials say Miami-Dade County will have to take the lead. The county says the city is in charge. Neither has immediate plans for Highland Village.

It may take a disaster before major changes happen.

"It's ironic, but in our way of doing emergency management, it's tough to get the money before the storm. And after the storm there's a lot of money," said Miami-Dade County Chief Resilience Officer Jim Murley.

Barring a disaster, Murley said, "it's easier to find the money" if a community comes to a collective decision on what it wants to do.

However, "most of the time, you just sort-of continue getting by," he added. "And people make a decision on their own accord if they want to stay or leave."

In the long run, the fate of Miami and many of the world's coastal cities depend largely on how much, and how fast, the oceans rise. Scientists still have a lot to learn before they can make accurate predictions. But, they warn, the pace of sea level rise is increasing.

For many, retreat from the coast is inevitable.

"We're going to have to leave sooner or later," said Caroline Lewis, founder of the climate advocacy group the CLEO Institute. "But if we can have a planned retreat, and we could implement some of our ideas about keeping people as safe as possible for as long as possible, then we would have accomplished a great deal that the whole world could learn from."

But in a city that carved itself out of a swampy wilderness, optimists abound.

"There's an engineering solution to every problem," Carpenter said. "It just comes down to, is there the political will to go through whatever pain may be associated with that solution, and the will to try and fund it."

This article was originally posted on VOA News.