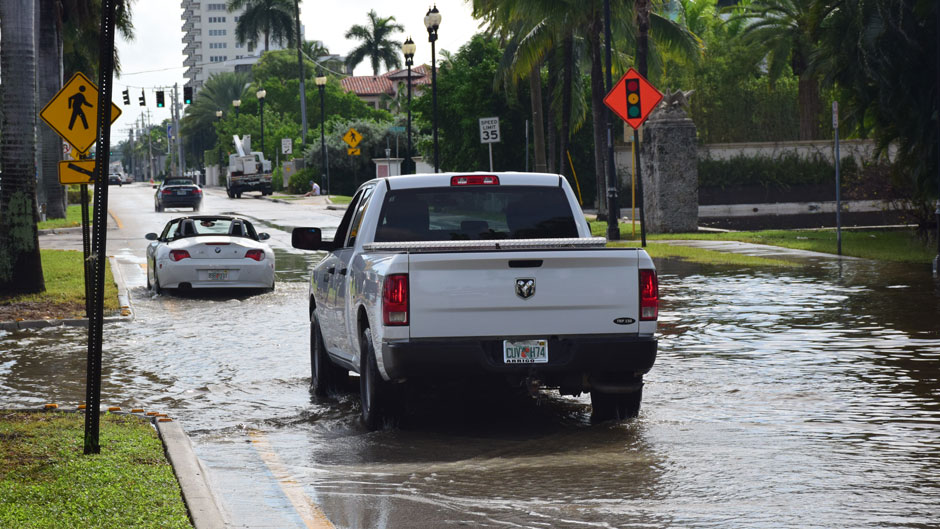 A $50,000 grant from telecommunications giant AT&T will help a team of University of Miami researchers advance their work on how coastal communities respond on a local rather than regional level to one of the most damaging consequences of climate change—sea level rise.

“This external funding is fabulous and the kind of support we need to help continue our important work,” said Sam Purkis, professor and chair of marine geosciences at the Rosenstiel School of Marine and Atmospheric Science, who is a team member on the project Hyper-Localism: Transforming the Paradigm for Climate Adaptation.

Also known as Hy-Lo, the multidisciplinary project is one of three that late last year received Phase II funding as part of the University of Miami Laboratory for Integrative Knowledge, or U-LINK, a key initiative of the University’s Roadmap to Our New Century.

With the additional support of the AT&T award, which is part of the telecom’s Climate Resiliency Community Challenge, the Hy-Lo team will be able to help coastal communities tailor effective climate action plans for their unique circumstances.

“Traditionally, when work like this is done, it’s done on a broad scale—big blocks of the city are considered and the behavior of people is viewed at a large scale,” Purkis said. “But with this project, we’ve realized that people make decisions at a very small scale. If there’s a hurricane coming, for instance, whether you choose to evacuate or not isn’t predicated only on what you’re listening to on the radio or watching on the news. It’s more likely that you’re making that decision based on talking to your friends, your neighbors and your family—to see what they’re doing. And that’s what drives your decision—whether or not, for example, you’re going to drive to Orlando to wait out the storm.

“We think the same thing will happen with climate change,” Purkis continued. “That the way people make decisions—whether they’re going to stay in the city, adapt or retreat—is also done at a very fine scale: talking to neighbors or whatever community they find themselves in.”

In a move to close the gap between top-down policies and neighborhood interests, the Hy-Lo team is developing an Integrated Climate Risk Assessment protocol with community partners, including the CLEO Institute, Catalyst Miami, and The Nature Conservancy.

“Our project will allow us to test the use of predictions of future climate extremes from state-of-the-art models in a community setting,” said team member Amy Clement, professor of atmospheric sciences at the Rosenstiel School. “I expect this will lead to an interesting discussion about what kinds of information on future climate is or isn’t most useful for decision-making at a hyper-local scale.”

Hy-Lo is not the only U-LINK team to be awarded external funding so early in the process. Although Phase II grants of $150,000, which could be renewed for a second year, were intended to advance the most promising U-LINK projects to the stage where they would attract external funding, four other teams, including two Phase I teams, have received a total of more than $6.25 million in external funding.

“Clearly, the teams are generating the kind of innovative ideas that result from meaningful interdisciplinary integration—and that funders are interested in,” said U-LINK co-director Susan Morgan, associate vice provost for research development and strategy. “We’re thrilled for them, and the communities and stakeholders they are working with.”

The grant comes on the heels of an agreement between the University of Miami and AT&T to bring 5G and Multi-access Edge Computing technology to the Coral Gables campus, making the University the first campus in the U.S. to offer the AT&T technology.