This article originally appeared in the South Florida Sun Sentinel. 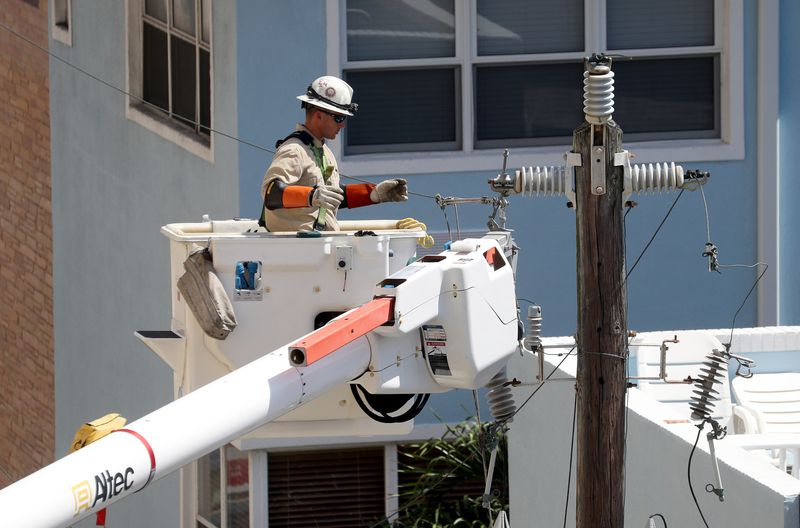 A Florida Power & Light technician works on repairing a downed power line in this file photo. On Tuesday, the Florida Public Service Commission approved raising rates for the company's 5.6 million customers by a total $1.53 billion over the next four years. Those hikes could be higher if prices for natural gas, which fuel FPL's plants, continue to rise. (Susan Stocker / South Florida Sun Sentinel)

Typical Florida Power & Light customers will pay about 18% more each month by 2025 than they paid in January 2021, based on terms of the utility’s four-year rate plan approved Tuesday by the state’s Public Service Commission.

As approved, the plan will generate an additional $4.9 billion from FPL’s 5.6 million customers through 2025. And the price hikes could increase even more if the cost of natural gas, used to fuel FPL’s power plants, continues to rise.

“This is a terrible day for FPL customers,” said Mike Hightower, president of an advocacy group Floridians Against Increased Rates.

Despite months of settlement negotiations, hearings and opposition from environmental groups, and even a revised plan submitted by FPL in August, bills for residential customers are now projected to increase along lines almost identical to the plan submitted by the utility in March.

Despite agreeing in August to reduce its original four-year rate hike request by a total $1.3 billion, FPL now projects that rising natural gas costs will wipe out those savings.

The settlement that FPL announced in March with the Florida Retail Federation, Florida Industrial Power Users Group, the Southern Alliance for Clean Energy and the Florida Office of Public Counsel reduced the projected January 2025 bill to $115.34 — a 16.4% increase.

In an announcement following Monday’s approval, FPL accounted for the natural gas price hike by revising the projected January 2025 bill yet again to $117.02 — an increase of 18.1%. Some of that increase has already been absorbed. A fuel cost hike approved in May upped the average 1,000 kWh bill for 2021 to $101.70.

What this means for your bill over time

Of course, many homes consume much more than 1,000 kWh of electricity, and bills would increase accordingly. The projected increases could become even worse if fuel costs continue to surge. FPL pointed out in a news release that the latest cost hike projections were based on fuel projections that FPL filed with the PSC in September.

“Since the September fuel filing, natural gas prices have continued to increase,” the release said. “FPL is closely monitoring the market and will notify the PSC in November regarding any adjustments to the company’s 2022 fuel projection.”

The utility is required to file for periodic rate changes based on fluctuating cost of natural gas. When prices go up, customers pay more. When they go down, customers pay less. Base rates approved by the PSC on Tuesday reflect fixed costs projected for capital improvements, plant expansions, operational costs and the return on equity promised to investors.

The approved plan reduces revenue originally sought over the four years from a cumulative $6.2 billion to $4.9 billion. By 2025, customers will be paying $1.53 billion annually than they currently pay.

FPL touted its rate plan as supporting long-term investments in infrastructure, “innovative technology” and clean energy, including what it called the largest solar buildout in the United States — 16 million solar panels across more than 50 new sites.

It also said “typical” residential bills would remain “well below the national average through 2025.”

“Florida is a rapidly growing state on the front lines of climate change and our customers deserve bold, decisive, long-term actions as we continue building a more resilient and sustainable energy future,” FPL President and CEO Eric Silagy said in the release.

But advocates for consumers and environmental preservation criticized cost hikes in FPL’s plan on Tuesday, saying they favor large commercial and industrial customers over residential customers, allow FPL to build more power generating capacity than needed and give investors a return on equity that exceeds those of other utilities.

Bradley Marshall, senior attorney in the Florida office of the organization Earthjustice, said residential customers will absorb more than $1 billion in rate discounts provided to large commercial and industrial customers.

He also called the 10.6% return-on-equity midpoint — which is the middle of the 2 percentage point range that investors can earn on their shares — higher than what’s being allowed for most other investor-owned utilities in other states.

Hightower of Floridians Against Increased Rates said the rate increase is the largest in Florida history and gives FPL “the biggest profit rate allowed this year by any state regulatory body in America.”

Natalia Brown, climate justice program manager for Catalyst Miami, said the plan focuses too much on expansion of fossil fuel-backed power generation. “FPL should be investing in renewable energy programs that are accessible, safe and affordable rather than capital projects poised to harm their customers’ quality of life,” she said.

Ron Hurtibise covers business and consumer issues for the South Florida Sun Sentinel. He can be reached by phone at 954-356-4071, on Twitter @ronhurtibise or by email at [email protected].