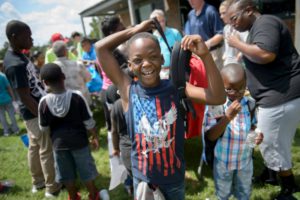 Honored for their efforts to ensure all residents have the opportunity to live longer, healthier, and more productive lives, the 2016 Prize winners are: 24:1 Community in the St. Louis area of Missouri; Columbia Gorge Region of Oregon and Washington; Louisville, Kentucky; Manchester, New Hampshire; Miami-Dade County, Florida; Santa Monica, California, and the Shoalwater Bay Indian Tribe in Washington.

Each winner will receive a $25,000 cash prize, join a network of Prize-winning communities, and share their inspiring stories of challenges met, successes achieved, and lessons learned with other communities building a Culture of Health across the country.

“The RWJF Culture of Health Prize communities show us that in towns and regions across the nation individuals are coming together to find powerful ways to help people achieve the best health possible. These communities are connecting the dots between health and education, jobs, housing, and community safety,” said Risa Lavizzo-Mourey, RWJF president and CEO. “We’re privileged to learn from this growing network of communities that offer hope for the well-being of the entire nation.”

There is no single path forward to building a Culture of Health. Solutions are wide-ranging and everyone has a role to play. Each of this year’s winners developed approaches as unique as the communities themselves:

24:1 Community, Missouri—In north St. Louis County, twenty-four municipalities came together with a collective vision: stronger communities, engaged families, and successful children. Calling themselves “24:1,” their work towards this vision is broad and innovative. Mayors meet regularly to share best practices. Police chiefs work together to reach the highest standards of policing. Schools have linked with businesses, nonprofits, childcare providers, and parents to restore the accreditation its school district lost in 2012. Across the 24:1 region, communities are focused on attaining health equity in ways that go far beyond health care. For instance, in one municipality, there is now a grocery store in a “food desert”, a new cinema, a “wealth accumulation” center that demystifies banking and finance, and other supports for residents.

Columbia Gorge Region, Oregon & Washington—In Columbia Gorge—a region along the Columbia River encompassing counties in Oregon and Washington—healthcare providers and other community partners are collaborating to use a new state system for assessing medical needs and allocating resources as a catalyst for improving the health of all residents. This has led to initiatives such as “Veggie Rx,” a prescription program that addresses food insecurity by helping more than 5,000 people buy fresh fruits and vegetables through vouchers. Community Health Workers steer people to needed services by meeting them where they live, in clinics, and social service agencies. Inclusiveness and collaboration are the driving forces, groups that were historically isolated from decision-making, including the region’s vast Latino population, now are playing a leading role in addressing the many factors that influence health.

Louisville, Kentucky—Collaboration, data driven decision-making, and a shared commitment to health anchor efforts in Louisville. Louisville aims to offer full economic opportunity for all residents through job training opportunities for youth and an effort to increase the number of residents with college degrees. The city has responded to rising violence with an all-in prevention approach and a range of initiatives, including weekly neighborhood Peace Walks with residents and police sharing ideas on how to make the city safer. Artists are being trained to help tackle challenging issues such as violence and racism and playing a pivotal role in job creation and science and technology education.  Community organizations, businesses, health systems, universities, and residents are working alongside each other to put good health within everyone’s reach.

Manchester, New Hampshire—In the largest city in northern New England, public officials and private sector leaders have taken a data-driven, block-by-block approach to better health. Manchester’s swift and compassionate response to the emerging opioid and heroin epidemic— which has successfully mobilized first responders, non-profits, and health care providers to connect residents with critical treatment services—has set a national example for other communities to follow. When more than half of the City’s school children qualified for public assistance programs, city leaders partnered with residents to transform schools in the city’s most socioeconomically disadvantaged areas, taking a community school approach that links health and education together. Former textile mills have been converted into high-tech spaces and outdoor recreation areas, spurring economic growth and providing more opportunities for physical activity.

Miami-Dade County, Florida— A vibrant, collaborative, and coordinated approach to improved health is happening across a diverse Miami-Dade County, where 51 percent of its almost 2.7 million residents are foreign-born and at least 79 cultures are represented within its borders. Hundreds of organizations and partners have joined together in the Consortium for a Healthier Miami-Dade County to make schools healthier, streets safer and more opportunities for well-being available to all. Programs like the Miami Children’s Initiative and the Violence Intervention Project are accelerating school performance and combatting gang involvement. Catalyst Miami, an organization that has helped over 5,000 residents set a course for moving from poverty to prosperity, exemplifies the sort of approach being taken throughout the county, an approach that focuses on residents leading and catalyzing community change.

Santa Monica, California—Santa Monica has been building an inclusive, equitable, and diverse community for more than 40 years, deploying creative solutions and strong cross-sector partnerships to drive exceptional progress. It started with a deeply-held commitment to affordable housing, including interdisciplinary “street teams” that address homelessness with compassion by connecting homeless individuals to critical housing and health services. Pioneering efforts to collect and use data were then applied to challenges facing children and families, such as the Cradle to Career initiative that brings parents, educators and service providers together to help children thrive. The City, with its many partners, then brought this data-driven approach to other priorities—from mass transit to open green space—to become a true City of Wellbeing where everyone thrives.

Shoalwater Bay Indian Tribe, Washington—For years, members of the Shoalwater Bay Indian Tribe had to drive 70 miles to see a doctor from their reservation on the coast of Washington. In the late 1980’s to early 1990’s, after a multiyear pattern of miscarriages and infant deaths, it became clear local health services were critically needed. Today, after overcoming many hurdles, a Wellness Center provides medical, dental, and mental health services for the tribe and surrounding community. Tribal elders are grooming a next generation of leaders by encouraging youth to contribute ideas to policies and participate in tribal government. For a small tribe located on a rural one-square mile in a floodplain and tsunami zone, safety is a top concern. By purchasing land on higher ground, Shoalwater is resetting its gaze on moving the reservation out of harm’s way.

Learn more about this year’s winners through a collection of visual content including videos, photos, and more at www.rwjf.org/Prize. While there, communities can also find out how to apply for the 2017 RWJF Culture of Health Prize.