Daniella Levine has a joke for you. It's a zinger, but it also nicely packages the philosophy that powers her life's work. 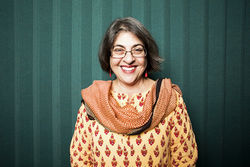 "How many social workers does it take to change a light bulb?"

"It doesn't matter how many," she says. "The light bulb has to really want to change."

Since throwing open the doors to Catalyst Miami (then known as the Human Services Coalition) in 1996, Levine has tried to kindle that will to change.

Today, the 30-employee nonprofit offers a smorgasbord of services in areas such as financial assistance — from how-tos on taxes and home ownership to health care. It's a one-stop shop for people looking to pull up to the middle class, or just hang in there.

But what separates Catalyst's founder, president, and CEO's effort from other members of the "helping professions" is that she aims to get her clients to a point where they don't need her anymore. Levine doesn't tiptoe around the sad truth of charitable impulses: Too often, an uncharitable power dynamic exists between the helper and the helped.

"People in the helping professions often are themselves disempowered," Levine says matter-of-factly.
"Very often, their self worth is based on their ability to take charge of someone else's life and make that person dependent."

According to her, the key is to remind her clients about their own self-sufficiency.

Part of Levine's effectiveness as a community organ­izer is anchored in her past. Born in New York City, she comes from a family that always stressed giving back and working for a more just society. "I was blessed with a happy home life. I never suffered for anything. My family believed in me. So that makes you more confident about being able to make a difference."

Levine received her bachelor's degree in psychology from Yale and a law degree and graduate degree in social work from Columbia. Before starting Catalyst, she was in the trenches with local aid organizations such as Legal Services of Greater Miami and the Department of Children and Families. But only by striking out on her own was she able to throw everything into the blender — her background, her degrees, and her mantra of self-empowerment.

"Catalyst is an emanation of my soul," she says. "And I believe in pulling people in the right direction instead of pushing them."