July 26, 2019
By Lautaro Greenspan
From The Miami Herald

That’s because the Trump administration proposed a new rule earlier this week that would curb enrollment in food stamps (formally called the Supplemental Nutrition Assistance Program or SNAP) by 3.1 million people nationwide. Fueling the policy change — as explained by U.S. Secretary of Agriculture Sonny Perdue — is a perception that a “loophole” is making SNAP enrollment easy to game, keeping assistance from reaching only those who need it most.

Specifically, the USDA’s new rule cracks down on a policy used in 43 states — including Florida — called broad-based categorical eligibility, or BBCE, a provision that lets low-income people access food stamps more easily. Limiting BBCE would result, according to the USDA, in a budget windfall of $2.5 billion a year.

The eligibility guidelines currently used for SNAP let about 14 percent of the state’s population receive food stamp benefits — that’s just around three million people, many of them living in more densely-populated South Florida. In 2018, the amount of people in the Sunshine State whose incomes were below the poverty line also represented 14 percent of the population.

For the head of Florida’s Department ofAgriculture and Consumer Services,the new federal policy change is cause for concern.

“While 2.8 million Floridians struggle with food insecurity, including 850,000 children, reducing federal nutrition assistance is a step in the wrong direction,” Commissioner Nikki Fried said in a statement to el Nuevo Herald. “Helping families rise out of poverty through nutrition has long received bipartisan support. [...] Cutting food stamp eligibility will hurt 3 million working families seeking a hand up – not a handout.”

Right now, BBCE, the policy targeted by the Trump rule, lets states raise the threshold of eligibility for SNAP above the federal limit of 130 percent of the poverty line (that’s $33,475 for a family of four), to make room for more low-income working families.

When Florida implemented BBCE in 2010, it set the eligibility for most households at 200 percent of the poverty line — that’s the most generous eligibility threshold in the nation, shared by 15 other states.

“Having that little comfort zone between 130 and 200 percent of poverty really means a lot to these families, and it saves them from having to go off the benefit cliff where you lose all your benefits but you still don’t have enough income to make up for the difference,” said Cindy Huddleston, a senior policy analyst at the Florida Policy Institute. “If your income is over 130 percent of the federal poverty line, without [BBCE], that would be the end of the road for your SNAP eligibility determination. [...] And who that’s going to affect the most are the working poor, people who are out there working, and food assistance is what lets them survive.”

Another way BBCE lets more people enroll in food stamps is by letting states opt out of federal asset limits, which currently restrict SNAP eligibility to households (without older or disabled people) to $2,250 or less in savings — a measure that effectively disincentivizes poor people from saving. In Florida, because of BBCE, there is no asset test required for most families when it comes to SNAP eligibility.

As Huddleston points out, state governments exhaustively check SNAP applicants’ need for food assistance, including those applying under BBCE. “To receive SNAP, all households, including those eligible under BBCE, must apply, be interviewed, and document that their monthly income and expenses, such as high housing and child care costs, leave them with too little disposable income to afford a basic, adequate diet,” writes Robert Greenstein of the Center on Budget and Policy Priorities.

Of the more than three million people set to lose their food stamp benefits nationwide were BBCE significantly narrowed, Huddleston said “a substantial number” call Florida home, likely to the tune of hundreds of thousands of people.

WHO USES FOOD STAMPS IN FLORIDA?

SNAP benefits are reserved for people with social security numbers, and, as far as healthy adults with no dependents are concerned, for those who work. Those who aren’t working can only get food assistance for three months every three years.

“I think that one of the things that is interesting about Florida is we have a high percentage of low income workers who are relying on SNAP. One in seven workers in Florida receive SNAP, which is a figure that often blows people’s minds,” said Huddleston. “The reason families have to turn to SNAP to put food on the table is because they have lost their jobs or suffered some other crisis and they need short term assistance. I think people don’t realize that snap is composed of working families.”

In South Florida, many SNAP recipients work in the tourism industry, according to Santra Denis, the chief program officer at Catalyst Miami, a local nonprofit. “That’s anything from restaurant workers to hotel workers,” she said. “There’s a large service sector here in Miami-Dade County, a lot of people making minimum wage, and they depend on the SNAP program to really help them be able to meet their monthly expenses.”

In Miami-Dade, according to USDA data, a large segment of SNAP recipients live within Districts 26 and 27, represented by Democrats Debbie Mucarsel-Powell and Donna Shalala, respectively. Hispanics make up an average of 85% of SNAP households within those districts.

IN FLORIDA, THIS ISN’T THE FIRST TIME BBCE IS IN JEOPARDY

If analysts can tell with confidence that the Trump administration’s new rule will hit Florida hard, it’s because they have the data to show for it.

Back in 2017, the Florida legislature considered a “family self-sufficiency” bill that, much like the new Trump rule, would have limited the state’s ability to enroll families in SNAP through BBCE. According to a House of Representative staff analysis of that bill, curbing BBCE would at the time have made 229,311 of SNAP recipients in the state no longer eligible because of income and asset limit changes. That would have been good for nearly seven percent of all Floridians enrolled in the food stamp program.

“At that time they also determined that the biggest group of people that would be affected would be children. Between eight and nine percent of all kids who were getting SNAP would lose their eligibility, and that would be well over 100,000 children,” said Huddleston. “The next group who would have mostly likely been affected would be people who are elderly or people who have disabilities.”

According to that same House staff analysis, the process of changing Florida’s SNAP eligibility rules would also come with significant administrative costs. The Florida Department of Children and Families, the agency responsible for administering the SNAP program in the state, estimated a cost range of $256,464 to $325,260 to implement the changes made by the 2017 bill, as well as a cost range of $7,553,489 to $23,638,824, annually, to contract for asset verification.

NONPROFITS AT THE READY

If adopted, the Trump administration’s new rule would mean a greater workload for the local organizations fighting hunger and food insecurity.

“The nonprofit network in these communities is going to have to step up to fill in an even larger gap for a lot of these families,” said Paco Vélez, president and CEO of Feeding South Florida, the largest hunger-relief organization in the region.

“Feeding South Florida has been very, very active in emergency response, whether it’s with hurricanes or any other emergency or disaster that comes our way,” added Vélez. “And so [the Trump administration’s new rule] is now something developing out there that we have to take seriously and start aligning our community [...] to get things prepared in case this thing goes through and we have to respond in a pretty significant way.”

According to a report released by Feeding South Florida earlier this year, 11.6 percent of the region’s population is already food insecure, meaning that over 700,000 do not know where their next meal will come from. When it comes to food insecure children, Miami-Dade County leads the rest of the region, with over 100,000 kids going to bed hungry.

As Vélez explained, the timing of the Trump administration’s BBCE announcement coincided with one of the times of the year in which hunger is greatest: summer vacation, when over half-a-million South Florida kids miss the reduced-price meals they get at school the rest of the year.

Because the Trump administration can enact its new food stamp policy without congressional approval, it’s likely to take effect soon. First, though, the rule has to go through a public comment process. That process ends on September 23. 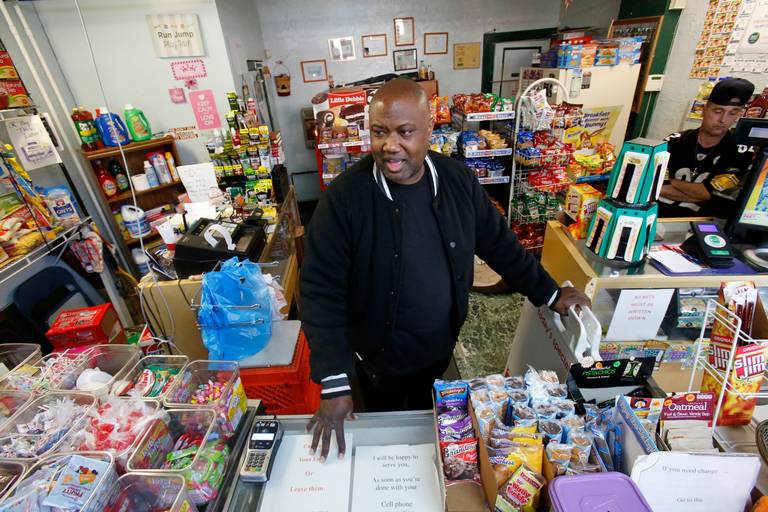 Carl Lewis stands in his market in Rankin, Pa., earlier this year. About half of Lewis’ customers pay with benefits from the federal Supplemental Nutrition Assistance Program. GENE J. PUSKAR AP[/caption]

This article originally appeared in The Miami Herald.