Hurricane Dorian could hit during King Tide, and Miami is preparing to flood

August 30, 2019
By Alex Harris and Joey Flechas
From The Miami Herald

When Hurricane Dorian makes landfall in Florida, current projections show the powerful storm could come ashore near one of the season’s highest tides of the year — a king tide.

Higher tides, combined with the showers already drenching the coast, could worsen coastal flooding for what is shaping up to be a slow, wet storm. The latest update from the National Hurricane Center predicted Dorian will strengthen to a powerful Category 4 hurricane as it approaches Florida before slowing down just as it reaches the coast.

If the storm does park itself offshore, it could dump rain on the region for awhile. Current estimates from the NHC suggest Dorian could bring 6 to 12 inches of rain to the southeast coast, with some spots seeing up to 18 inches.

“We understand this could be a slow-moving storm event. That concerns us. The longer it stays in our area, the more water that will accumulate,” Miami-Dade Mayor Carlos Gimenez said in a press conference. “This hurricane is approaching us at a time when we’re experiencing king tides here. That’s making it worse.”

The National Weather Service warned Thursday that this king tide, the second of four expected for the east coast this season., could cause minor tidal inundation during high tide this weekend. Readings from Virginia Key’s tidal gauge show that this tide is already coming in up to eight inches higher than predicted.

Sea level rise has made these annual high tides higher over the decades and dramatically driven up the stakes for municipalities struggling to adjust to climate change. By 2060, South Florida officials are planning on two feet of sea level rise. And that’s not accounting for another of climate change’s deadly impacts, stronger hurricanes.

Although the peak of this king tide is expected on Sunday’s noon high tide, residents in low-lying Miami Beach were already reporting flooded streets on Wednesday and Thursday. 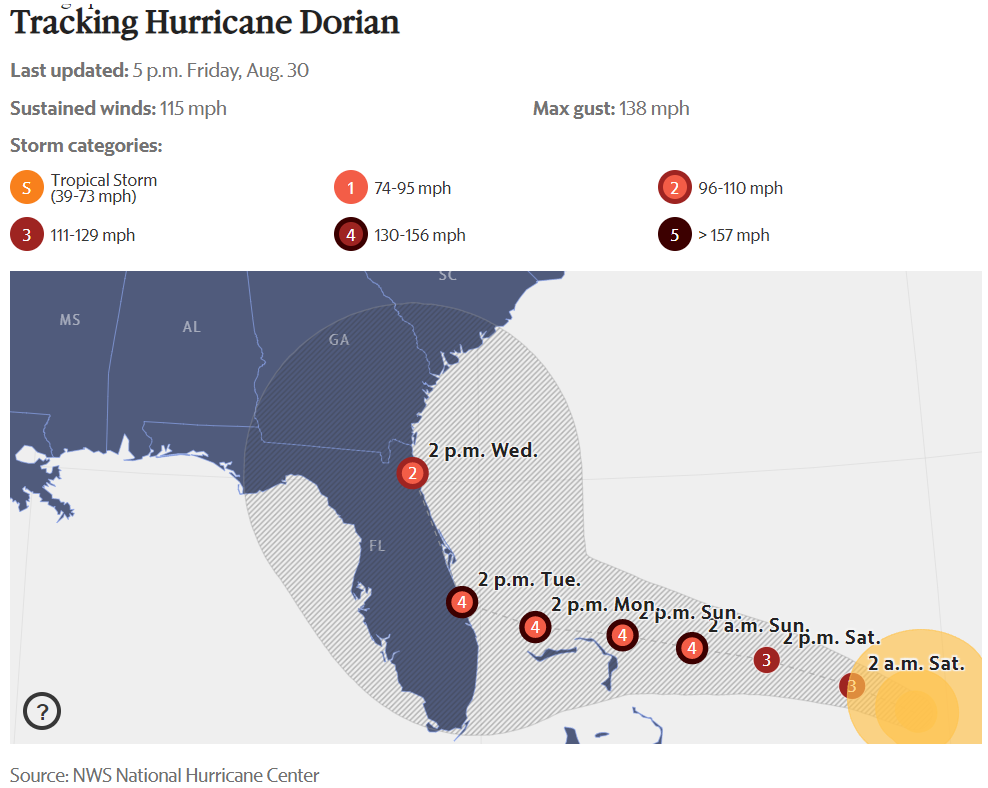 Zelalem Adefris, a South Beach resident, was visiting some out-of-town friends near 18th Street and Collins Avenue when she noticed the street was flooded up to the sidewalk with about six inches of water.

“It was after one of those 15-minute rainstorms that we get often in the summer,” she said. “It was funny because my friends were freaking out thinking it’s the hurricane when it’s really just king tide.”

The city has invested more than $100 million in anti-flooding projects — work designed to handle sunny-day tidal flooding that seeps up through the porous earth under the island. Administrators know heavy rainfall on top of a king tide will overwhelm there drainage system, forcing an army of permanent and temporary pumps to work overtime to keep water off the streets.

City workers were preparing the island city for Dorian this week, despite the uncertainty over where the hurricane will actually make landfall.

“This storm is a major rain event coinciding with king tides this weekend,” said Miami Beach City Manager Jimmy Morales. “We have been doing things like, already over the last several days, cleaning out storm drains, vacuuming out our system to make sure its flowing as efficiently as possible. We’re locating 10 temporary pumps around the city. and 16 temporary generators for pumps that are already in place.”

The city of Miami’s government has expanded the capacity of one pump system and installed a new one in Brickell, the site of dramatic flooding during Hurricane Irma in 2017. Biscayne Bay overtopped the seawall and poured into the street from the bay to Brickell Avenue in low lying areas.

The city had already planned to clear out storm drains in advance of the king tides and prepare the city for tidal floods.

“We have gone and not only checked our own generators to make sure that our pumps systems are working and that there’s backup generator power,” said Miami Mayor Francis Suarez, in a press conference. “With our vac trucks, we’re clearing our drain system, and we have three portable vac trucks that are on standby to continue to clear drains that are clogged.”

Since Irma, Miami has installed 32 tidal valves to keep expelled floodwaters from flowing back up through the city’s outfalls. Serious rainfall from a slow-moving hurricane will overwhelm the system and force administrators to keep the valves open to make sure pumps push water out.

Miami’s resilience and public works director, Alan Dodd, told the Herald the city has already deployed three temporary pumps to the city’s lowest-lying areas and more are on standby if the forecast worsens. After the press conference, Dodd explained to senior administrators and commissioners that the high tides have exceeded NOAA’s predictions.

The tides set an uncomfortably high water level in the days before a hurricane threatens to dump at least several inches of rains — a worrisome prospect for a city that has not yet fully transformed its drainage infrastructure to deal increased flooding in the face of rising seas fueled by climate change. Miami has hotspots for flooding in Shorecrest, Fairview, Brickell and Coconut Grove.

At a press conference in County Hall in downtown Miami, county Mayor Carlos Gimenez said it’s too early to offer guidance on possible evacuation orders for the coast and other low-lying areas, but that Miami-Dade workers are focusing on mitigating the risk from flooding.

“All our crews are out are taking debris away from the storm drains, so they’ll flow,” he said.

It’s too soon to know how well these preparations will fare, as King Tide is expected to begin to peter out Monday, right as Hurricane Dorian approaches the coast. If the storm does shift more south, it’ll be a test of the millions of dollars these vulnerable cities have sunk into protecting their communities from the dangers of climate change-strengthened hurricanes and rising seas.

Miami activist groups, like Adefris’ Catalyst, has been pushing the city to look beyond concrete-and-steel answers to those problems and change policy that gets at the cause of climate change, emissions.

“We should be doing mitigation and cutting our greenhouse gas emissions. I see not that much of that and a lot of sea walls and infrastructure,” she said. “Ultimately we’re not going to be able to build our way out of stronger hurricanes and sea level rise.”