Report: Despite Progress, Too Many Floridians Remain in Poverty; More Investments in Human Needs Programs Needed

Despite Progress, Too Many Floridians Remain in Poverty
More Investments in Human Needs Programs Needed

New data released by the Census Bureau on September 17th show that poverty declined in Florida from 17 percent in 2013 to 16.5 percent in 2014. The child poverty rate, however, remains stuck, with 23.8 percent of Florida children living in poverty in 2014 – roughly the same as in 2013 when 24.5 percent of our children were poor. Despite the welcome reduction in the overall poverty rate, progress remains slow. Nationally, the poverty rate fell slightly from 15.8 percent in 2013 to 15.5 percent in 2014. However, even if poverty keeps declining at the current rate nationally – an extremely optimistic estimate – it would still take more than 25 years just to cut poverty in half across the U.S. It would take even longer – nearly 35 years – to bring child poverty down to that same level.

In order to speed up the pace, Florida and the nation need to maintain and expand investments in programs with proven success in helping people out of poverty. The new Census Bureau findings add to the mounting evidence that programs like low-income tax credits, the Supplemental Nutrition Assistance Program (SNAP, formerly known as food stamps), and subsidized housing reduce poverty now and improve children’s chances of gaining economic security in the future. But some effective programs do not reach enough of the more than 3.2 million Floridians and the 48 million Americans struggling in poverty every day. Others, like SNAP, could do more good if their benefits were higher. Even the modest progress beginning to show in the Census data could stall unless Congress follows through by enacting spending bills that will increase investments in effective antipoverty programs, now that Congress has just agreed to prevent most of the “sequestration” cuts originally scheduled to hit many of these programs this fall. With poverty higher in Florida than the national rate, accelerating the current progress – and doing nothing to slow it – is of paramount importance.

Deep and Disproportionate Poverty in Florida
For a family of four in 2014, the official poverty line was less than $24,230. Despite this low threshold, nearly 1.4 million Floridians live on far less, below half of the poverty level. As is the case nationwide, poverty in Florida disproportionately affects people of color. Nearly 27 percent of African Americans and 21.7 percent of Latinos in Florida are poor. In contrast, poverty for non-Hispanic whites is 11.5 percent. Nearly 24 percent of Florida children are growing up in poverty, and the statistics are worse for children of color: 36.5 percent of African American children and 29.5 percent of Latino children in Florida are poor.
We Can Speed Up the Pace in Florida
Proven human needs programs lift millions out of poverty. The Earned Income Tax Credit (EITC) and Child Tax Credit (CTC) lifted 600,000 Floridians, including 311,000 children, out of poverty each year, on average, during 2011 to 2013. In 2014, housing subsidies lifted 2.8 million Americans out of poverty, and SNAP lifted 4.7 million people out of poverty across the U.S.
Numerous research studies also show that investments in quality, affordable child care and early childhood education also lead to long-term gains for children, families and our economy. For example, Head Start participants are more likely to attend college and be employed and less likely to be a teen parent or in poor health compared to siblings who didn’t benefit from Head Start.

Congressional Cuts and Lack of Investments will Slow Progress in Florida
As effective as these programs are, their effectiveness is limited because of underfunding, and any additional cuts would threaten these programs further. First imposed in 2013, sequestration’s impact through the end of 2014 resulted in 1,349 fewer rental housing vouchers in Florida. The 2013 sequester cuts also denied Head Start services to 57,000 children nationwide. Thousands of rental vouchers were restored when Congress partly halted sequester cuts in FYs 2014 and 2015, and the numbers of children served by Head Start returned to previous levels in most areas.

Unfortunately, spending bills originally proposed by Congress earlier this year assumed that sequestration cuts would return in FY 2016. These House and Senate bills would have undercut the gains of the nation’s successful antipoverty programs. Their original proposed appropriations would mean that 11,400 fewer children in Florida would have had access to full day, full year Head Start when compared to President Obama’s budget. The spending bills not only failed to restore the 67,000 rental vouchers still lost due to sequestration in 2013, they would have cut even more, failing to renew as many as 50,000 existing vouchers nationwide. As a result, 2,300 fewer Florida families would have had the use of housing vouchers in 2016. In addition, the Congressional Budget Office estimated that maintaining sequestration could lead to losses equal to as many as 1.4 million jobs over the next two years. Compounding these losses, as many as 158,400 fewer workers in Florida would have had access to job training and employment under Congress’s original plan, compared to the President’s budget. Florida would have also lost as much as $60.9 million in federal funding for K-12 education in low-income schools (Title I).
Thankfully, a budget deal that was signed into law by President Obama on November 2 provides additional funding to eliminate the majority of the harmful sequester cuts in Fiscal Years 2016 and 2017. This is welcome news. However, more than 130 human needs programs have seen their funding cut since 2010, adjusted for inflation; about one-third were cut by 15 percent or more. Even with the sequestration relief provided in the new budget deal, funding for domestic programs for 2016 would be 12 percent below the 2010 level, adjusted for inflation. By 2017, domestic spending would fall to its lowest level on record as a share of the economy, with data back to 1962.
The U.S. Department of Agriculture found that 13.8 percent of Florida households were “food insecure” over the years 2012-2014 – that is, they could not always afford enough food. SNAP reduces such hardships, but cuts in SNAP that occurred at the end of October 2013 cut the average benefit from $1.70 per meal to $1.40. According to health researchers Children’s HealthWatch, that cutback made SNAP households with children under age three 23 percent more likely to be food insecure, placing the children at risk for bad health and education outcomes. In addition, if Congress fails to renew improvements made in 2009 to the EITC and CTC before they expire in 2017, 16 million people – including 8 million children – will be pushed into or deeper into poverty across the U.S.

As Congress works on new spending bills that must pass by December 11, they must ensure that the higher funding totals from the budget deal are used to provide more of the services people need. We also need additional investments in programs that are proven to reduce poverty so more Americans who need help can get it. Our country can afford to pay for these additional investments by closing tax loopholes, ending some corporate tax breaks, and ensuring corporations and the wealthy pay their fair share. Ending the extra tax breaks for hedge fund managers, for example (a proposal with bipartisan support), would save nearly $1.4 billion a year, nearly enough to fund the $1.5 billion to cover a full year, full day program for all children in Head Start.

Congress Needs to Stop the Cuts and Increase Investments
Our state and our country are continuing to recover from the Great Recession. And we have made some progress, as the Census Bureau’s poverty data show. But this progress is too slow. By 2020, more than half of children in the U.S. are expected to be part of a minority racial or ethnic group. If the shamefully high poverty numbers for African American and Latino children stay so high, the future economic growth of Florida and our country will be endangered as a larger proportion of our children grow up with less education and less connection to good-paying jobs. Increasing investments in programs like Head Start and safe, secure housing will give these children a better start and will benefit Florida and our country as a whole as they become adults.

Members of Congress have a choice to make. They can continue to cut or provide flat funding for human needs programs, stalling progress and making it harder for Floridians to climb out of poverty. Or they can stop harmful cuts and instead invest more so Florida and the whole nation can expand programs that prevent and eliminate poverty.

This report was prepared by Catalyst Miami and the Coalition on Human Needs.
Graphics provided by National Priorities Project. 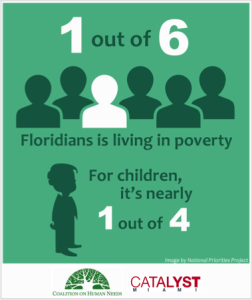 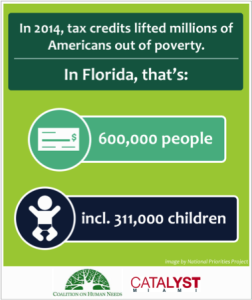 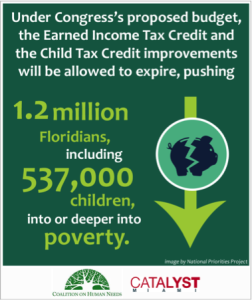