ACTION ALERT:
You can help stop SB 1024 / HB 741 by writing your legislators at savesolar.org/fl. 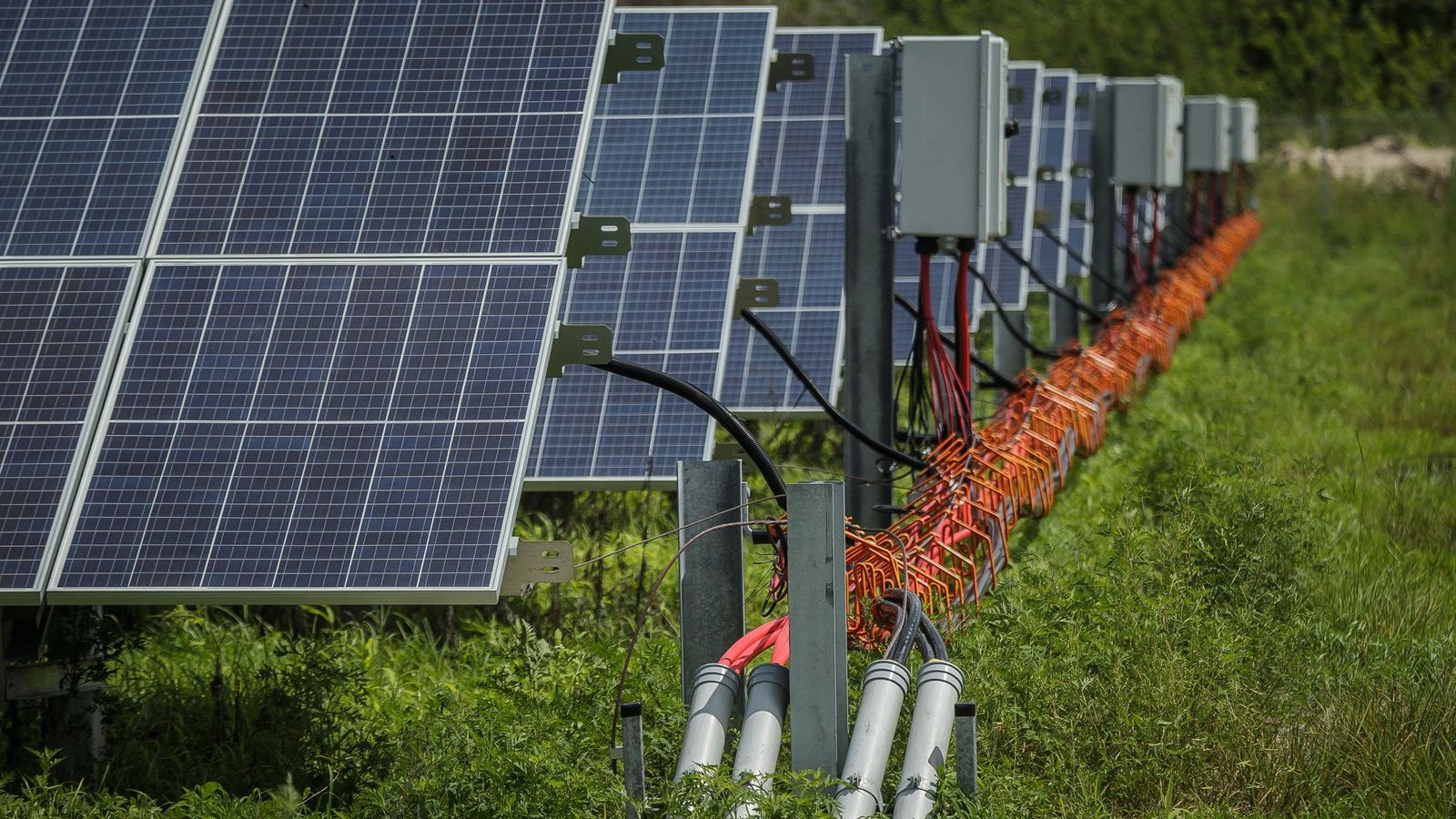 Florida Power & Light pushed for a bill that would hobble rooftop solar by preventing homeowners and businesses from offsetting their costs by selling excess power back to the company, an arrangement known as net metering.

Rooftop solar, while critical to fighting climate change, is a threat to the traditional utility business model. So Florida Power & Light did something about it.

TALLAHASSEE — Rooftop solar power generation in Florida is still a nascent industry, but Florida Power & Light, the nation’s largest power company, is pushing to hamstring it — by writing and hand-delivering legislation the company asked state lawmakers to introduce, according to records obtained by the Miami Herald and Floodlight.

Florida Power & Light, whose work with dark-money political committees helped to secure Republican control of the state Senate in the 2020 elections, asked state Sen. Jennifer Bradley to sponsor its top-priority bill: legislation that would hobble rooftop solar by preventing homeowners and businesses from offsetting their costs by selling excess power back to the company, an arrangement known as net metering.

Records from the Florida Senate show that Florida Power & Light drafted the bill, and lobbyist John Holley delivered it to Bradley, R-Fleming Island, and Florida Power & Light’s parent company followed up with a $10,000 contribution to her political committee. Bradley filed the bill in November. A week later, state Rep. Lawrence McClure, R-Plant City, introduced an identical version in the House.

The solar industry — companies that make, sell, install, lease and maintain rooftop solar equipment — is fighting back fiercely, suggesting that the bill will devastate its business.

“This is a tired tactic that utilities have used to maintain their monopoly grip on electricity markets,” said Will Giese, southeast regional director for the Solar Energy Industries Association. “Net metering is a popular program that gives people the right to choose the energy that works for them, provides benefits to all ratepayers and creates thousands of energy jobs across Florida.”

But Florida Power & Light is arguing rooftop solar could cost Florida utilities about $700 million between 2019 and 2025, according to documents submitted to the Florida Public Service Commission. That’s a trend nationwide, as power company profits are threatened by the rise of distributed renewable energy — a technology which scientists say is essential to limiting the pollution that causes the climate crisis.

Florida Power & Light spokesperson Chris McGrath said the company doesn’t oppose net metering but wants to see the current law revised. He argued that customers with rooftop solar are being subsidized by other customers who continue to buy electricity and pay to maintain the power grid.

“We simply believe rooftop solar customers should pay the full cost of this investment,” McGrath said.

The bill is just one front in a decade-long battle against the policy. For years, Florida Power & Light has been one of the largest contributors to legislative Florida political campaigns. It backed a failed ballot amendment in 2016 that would have allowed regulators to impose fees and barriers to rooftop solar installation. Florida Power & Light has also invested millions into groups with untraceable, anonymous donors that launched attacks on state and local politicians.

According to reporting by the Orlando Sentinel, Florida Power & Light executives have been tied to a series of ‘dark-money’ nonprofits, one of which figures prominently in the Miami-Dade state attorney’s investigation into a scandal involving a “ghost” Senate candidate. Under the scheme, a candidate with no political background was on the ballot as a no-party option in an effort to confuse voters and dilute support for the Democrat in the race, helping Republicans maintain their majority in the state Senate.

“Any report or suggestion that we had involvement in, financially supported or directed others to support any ‘ghost’ candidates during the 2020 election cycle is patently false, and we have found absolutely no evidence of any legal wrongdoing by FPL or its employees,” McGrath, the Florida Power & Light spokesperson said in response to questions for this story. Records obtained by the Sentinel also show overlap between Grow United and previous campaigns to overhaul net metering.

One person affiliated with Grow United is Abbie MacIver, who formerly worked for Energy Fairness, a group that encourages policymakers to consider the “cost of energy choices, as well as their benefits.” Last year, McClure sent a letter to state regulators at the Florida Public Service Commission citing the result and urging it to update its net-metering rule.

The commission held a workshop, which drew 16,000 messages from solar advocates urging it to leave the net metering program alone. Commissioners said it was the highest response rate they had received on any issue and concluded that no immediate changes to net metering needed to be made.

“What people may not realize is that public opinion is very much in our favor,’’ said Bryan Jacob of the Southern Alliance for Clean Energy. “They’ve got the lobbying power, and we’ve got the people power.”

How the bill came to exist

Bradley, who received Florida Power & Light’s draft bill, is a first-term senator who is close to Senate leadership and chairs the Community Affairs Committee and the Subcommittee on Congressional Reapportionment. Bradley is married to former state Sen. Rob Bradley, an influential politician who was head of the Senate budget committee.

Bradley said the bill language emerged after a meeting she had with Holley and other members of the utility industry.

“I looked at the language. It was based on our discussion, and it was one that I could support as a starting point,’’ she recalled.

“Good afternoon, Hope you’re doing well,’’ she said. “I just wanted to check in and see if you had any follow up information or language in regards to the net metering bill you discussed with Senator Bradley.”

Holley replied eight minutes later: “I do. Can I bring it to you all later today?’’ he wrote. Heffley suggested that he could “send it via email today or we will be at the Capitol next week.”

Holley declined to provide an electronic version and offered to “drop it off” in person the following week. Ten days later, Heffley wrote Holley again. “I just want to reach out and see if I could get an electronic copy of the net metering bill so I can put it into drafting.”

McClure’s political committee, Conservative Florida, did not receive any utility money during this time but on Nov. 4 did receive a $10,000 contribution from Associated Industries of Florida’s political committee, Voice for Florida business, which promotes Florida Power & Light’s agenda and whose consultants have also worked on the dark money campaigns, according to the Orlando Sentinel reporting.

NextEra Energy said its political committee did not make its contribution to Bradley’s campaign “with an expectation of favor.”

These email records were provided to the Times/Herald and Floodlight by the Energy & Policy Institute, a watchdog organization that works to counter misinformation about renewable energy.

Florida is one of 47 states that allow households and businesses that produce power to sell it back to the grid at a set rate. However, those policies are coming under fire as utilities become increasingly concerned about how the growth of distributed solar energy affects their bottom line.

In California, regulators plan to increase fees on rooftop solar customers. Even some environmental advocates say the change is fair and necessary because of the fast rate of rooftop solar development in that state.

Rooftop solar, while critical to fighting climate change, is a threat to the traditional utility business model.

Under Florida’s current arrangement, homes and businesses that generate less than 2 megawatts of solar power can sell the excess back to their utility in exchange for a bill credit of 11 cents per kWh. Florida Power & Light argues that arrangement is unfair to customers who don’t generate their own power but continue to pay for the costs of maintaining the grid that rooftop solar customers also use.

Rooftop solar in Florida expanded slowly until 2018 when the Florida Public Service Commission allowed electricity customers to lease solar systems with little or no upfront costs. That decision catapulted the growth of small-scale solar capacity in the state. It grew by 57 percent in 2020, according to the U.S. Energy Information Administration.

The solar industry disagrees, pointing to research that shows rooftop solar penetration is low enough in most states that “the effects of distributed solar on retail electricity prices will likely remain negligible for the foreseeable future.”

But utility experts have testified to the Florida Public Service Commission that rooftop solar in the state could grow at a rate of 39 percent a year until 2025 if Florida’s current net metering system is left in place.

That growth has the utilities, and legislators, worried.

“As a result of the current system, my constituents are being forced to subsidize the decisions of neighbors in other counties who are in a position to be able to put these expensive systems on their homes,’’ Bradley said.

What the bill would do

The bill also allows utilities to charge rooftop solar customers more, by adding in facility charges, grid access fees and minimum monthly payments. Customers who are already using rooftop solar power before 2023 would be grandfathered in and keep their previous compensation rates for 10 years.

Bradley said she is open to discussing alternative models for her bill, including a system in use in the Carolinas to compensate rooftop solar customers who provide extra power for the grid when it is most needed, during peak hours.

Florida now has the second-largest solar workforce in the country — about 11,000 direct jobs and 31,000 indirect ones, according to the Solar Energy Industries Association. It ranks third among states for installed solar capacity, although much of that is large-scale, utility-owned solar.

Justin Vandenbroeck, the president of the Florida Solar Energy Industries Association who also owns an Orlando-based solar installation company, said the solar industry consists mostly of independently-owned small businesses. “If this bill passes as it is, it has the potential to send Florida back to 2013, as if the advances of the last 10 years didn’t happen,’’ Vandenbroeck said.

McClure conceded the bill “is not baked.”

“Very early on in this bill’s ride, I think it has a real chance to settle out in a way that most parties are not upset,’’ he said. He added that the net metering law has not been updated in 13 years and now is time to discuss it.

“We need to have the debate,’’ he said. “I’m not afraid if the conclusion is it’s not the time to do this. I feel rooftop solar is beneficial to the environment, and Floridians. I am concerned that it will result in significant costs here, but I also don’t want to destroy the rooftop solar industry in Florida.”

Katie Chiles Ottenweller, Southeast director for Vote Solar, an Atlanta-based advocacy organization, is optimistic but wary given Florida Power & Light’s clout in the Florida Legislature and its role in drafting the bill.

This story is a collaboration with Floodlight and originally appeared on the Tampa Bay Times.