In August of 2021, after significant pushback and discussions with other parties involved in this regulatory battle, FPL filed for a settlement that slightly lowered their original rate increase proposal. The terms were crafted in closed door negotiations, which excluded the community-based organizations intervening in the public interest. FPL and the signatories deliberately ignored state rules and ensured that no party representing residential customer interests was invited, much less present, at the negotiating table.

"Since residential customers were denied a seat at the table, they wound up on the menu."
— Earthjustice representing Florida Rising, League of United Latin American Citizens, and Environmental Confederation of Southwest Florida

Catalyst Miami continued to work in close partnership with Florida Rising, Earthjustice, Miami Climate Alliance, Florida Conservation Voters, and other energy justice advocates to demystify the key decision emerging in this case. Simply stated, the PSC could side with corporate interests or acknowledge the needs of residents and small businesses across the state. 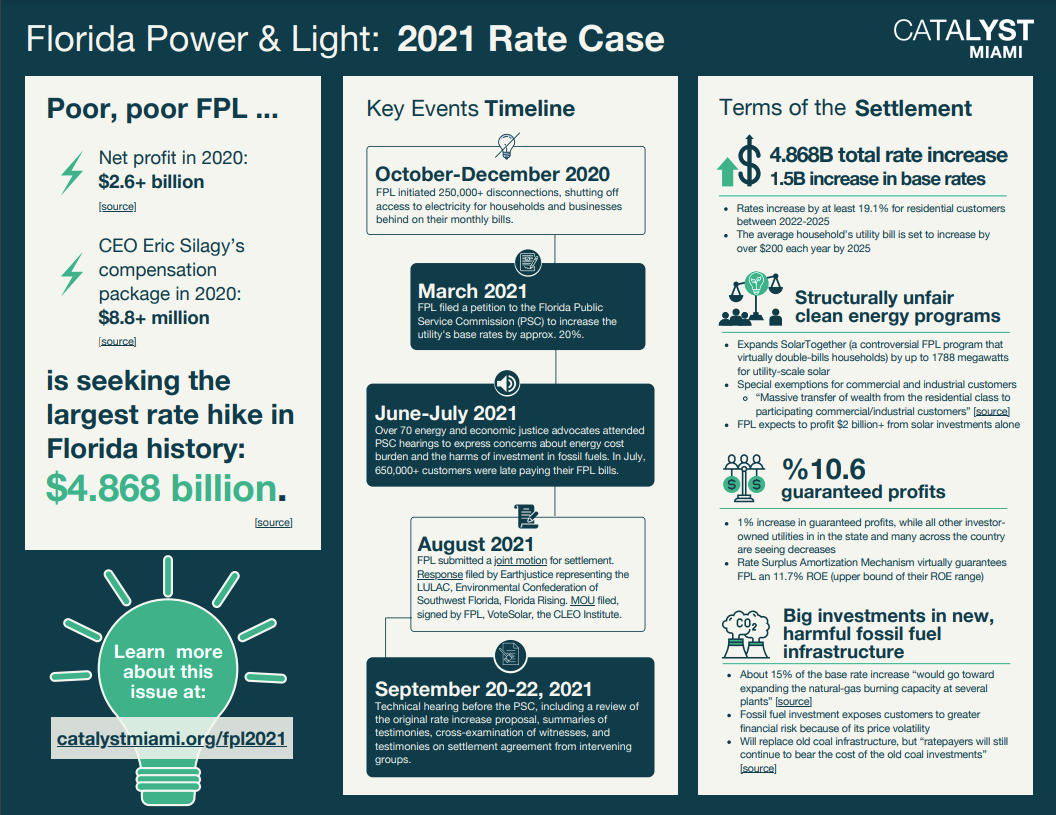 In late October of 2021, the PSC approved the settlement agreement. So, FPL is allowed to increase rates by a record-breaking $4.868 billion—the largest rate increase in Florida’s history. The average household utility bill is set to increase by over $215 each year by 2025.

Campaign donations, donations to local nonprofits in exchange for political support, and dark money spending by utilities are not uncommon. Regulators and legislators tend to feel a stronger cultural, financial, and personal tie to the people they are supposed to regulate than they do to the ones they are supposed to protect. There is significant on- and off-the-record influence leveraged to fuel harmful rate cases and nearly unfettered investment in capital improvements at the cost of residents and small businesses across the country.

The PSC was created to ensure that reliable utility services are provided at fair prices by enforcing and setting regulations for utility companies. Commissioners are expected to approve proposals that are lawful and in the public interest, but this agreement egregiously fails both of those tests. It’s no surprise that FPL secured all that the company’s elite desired by shuffling the pawns on their chess board. The company is making the most of their connections to the state legislature and regulators, while acting to keep the public from paying attention.

The terms of this settlement agreement mount a disproportionate share of the rate hike on the backs of residential customers. Households are poised to be charged well over their fair share and actively subsidize the rates paid by FPL’s commercial and industrial customers by several hundred million dollars. This unfair structure, justified in the name of clean energy, should be a resounding alarm for municipalities, community-based organizations, and impacted small businesses and residents navigating extreme heat, poor quality infrastructure, barriers to democratic participation, and health inequities. Any energy transition which ostensibly deploys renewable energy at the expense of people’s basic needs is not the transition needed by all Florida residents.

Many utilities try to have it both ways. They work against clean energy to fuel the flames of climate denial and disinformation, while positioning themselves as the only ones who can implement clean energy infrastructure at scale. Some utilities are phasing in small amounts of renewables, but they are doing it in a way that maintains monopoly power and control.

Among other capital projects, some of the funds extracted from FPL ratepayers are supposed to go towards expanding structurally unfair clean energy programs. FPL brands one of their controversial programs as utility-scale community solar, but there is little to no community involvement or benefit for energy consumers. This is not true community solar.

Instead, Solar Together allows for FPL to essentially double-bill customers for solar energy. It also portions out a higher share of the solar capacity for commercial and industrial customers, keeping residential customers from accessing a share that is fair in proportion to what we will be paying. This is a prime example of how the settlement agreement will drive a “massive transfer of wealth from the residential class to participating commercial/industrial customers.”

The cost of these unfairly structured clean energy investments looks like a couple hundred million dollars on paper, but it’s likely to balloon out over their lifetime. FPL expects to make over $2 billion in profit from the solar investments alone.

If FPL were sincere in its intentions to “deliver America’s best energy value,” we would see the company taking responsibility for their harmful programs and practices. The evolution and outcome of this rate case prove that FPL is not interested in taking part in such change.

We need new opportunities for distributed ownership and access to the holistic benefits of a renewable energy system. We need accessible and supportive assistance programs that provide long-term relief for ever-increasing utility cost burden and debt in times of crisis. We need infrastructure and governance principles that support the health and well-being of workers and communities, not only an accumulation of wealth for the corporate elite, commercial and industrial classes. This will require people and communities to embrace their agency and challenge dominant players in the energy system as it exists.