Most electric utility companies in the United States are regulated monopolies. This means they are legally protected from competition, have a captive customer base, and earn guaranteed profits. Meanwhile, a group of commissioners (public officials who are nominated by the state legislature) monitors the companies’ activities, sets and enforces regulations for their services.

Florida Power & Light Company (FPL) is the largest monopoly corporation in the state. Throughout 2020, while many of our neighbors struggled to keep up with monthly bills, the company banked over $2.65 billion in net earnings, and FPL President and CEO Eric Silagy received an $8.8 million compensation package.

This is a $1.1 million jump from his compensation in 2019 and over 150 times as much as the median household income earned by Floridans in recent years. Our households, known to FPL as residential customers, are the greatest source of this revenue. Since 2016, residential customers have consistently accounted for 55 percent of FPL earnings.

Low-wealth communities and communities of color are often most impacted by high energy costs, known as energy burden, and energy insecurity. When people have inconsistent access to reliable and affordable power, they are forced to make tradeoffs between other expenses—like medications, childcare, or food. Energy insecurity often becomes a part of a cascade of disadvantages including financial hardship, inadequate housing, poor nutrition, and unmet health-related needs.

No business or policy decision should leave our neighbors or loved ones in the dark during times of collective hardship. Accessible and affordable energy services are essential to maintain our communities’ security and well-being. With this firm belief, energy justice advocates throughout the state worked to establish and extend moratoriums on electricity shut-offs starting in March of 2020.

Unfortunately, FPL resumed disconnections in October of 2020. Over the course of three short months, FPL shut off power over 250,000 times for customers who were behind on their monthly bills (combined data: Oct, Nov, Dec).

There is no industry standard or government mandate that requires utilities to release public information about disconnections. The data is reported inconsistently, and advocates often have to piece together datasets that only include a fraction of the people impacted by high energy burden. 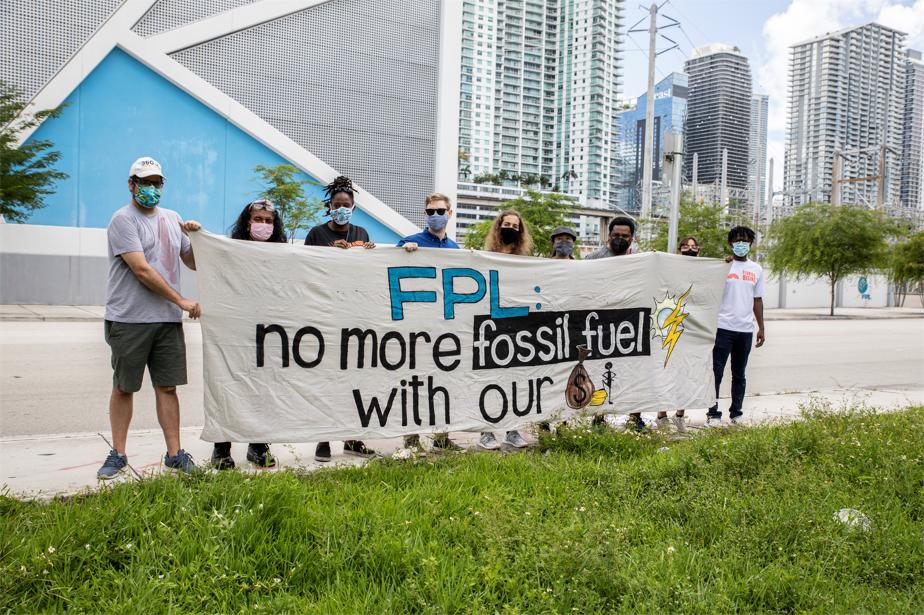 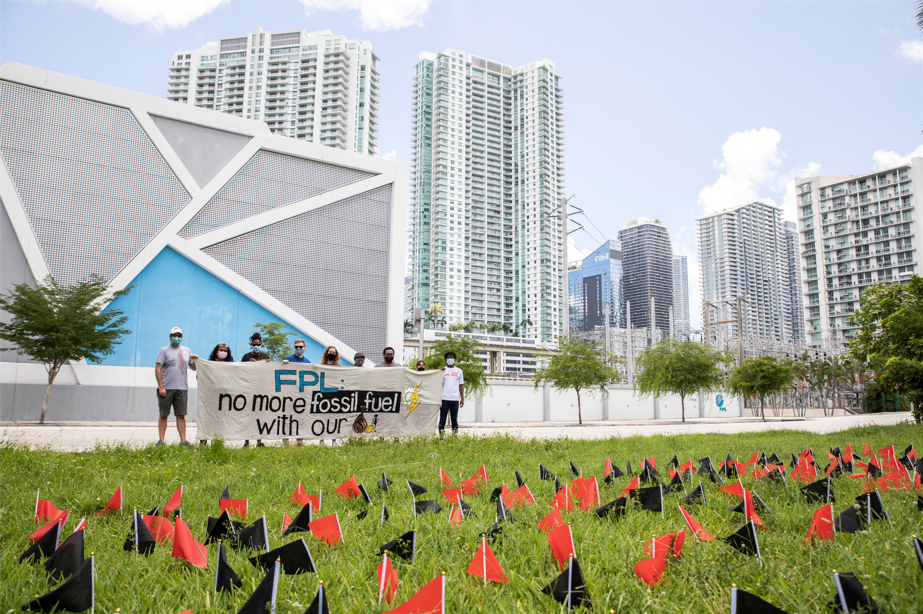 Photo caption: In August, demonstrators from community groups gather outside FPL building in Miami where they have planted 250 flags to represent the 250,000 disconnections initiated by FPL after the moratorium on electricity shut-offs expired in the final months of 2020.

The households and small businesses facing energy insecurity and higher risk for disconnection are most often bearing the burdens of historic and ongoing environmental injustices. Partnerships between advocates and community based-organizations reveal that structural problems are fundamentally baked into the energy system.

A focus on utility accountability reveals that FPL is not the only bad actor. For example, utilities across the country recently wielded their political power to secure beneficial tax-code changes in the Coronavirus Aid, Relief, and Economic Security (CARES) Act. Nine utilities received tax bailouts totaling $1.25 billion. It would have cost just 8.5% of that amount to prevent every shutoff reported by these companies.

This economic stimulus bill was supposed to support those struggling amidst the economic fallout of the COVID-19 pandemic. With the money utilities spent on executive pay and dividends, many could have bailed out their customers more than 500 times. But, none of those utility dollars were used to relieve households’ or small businesses’ debts.